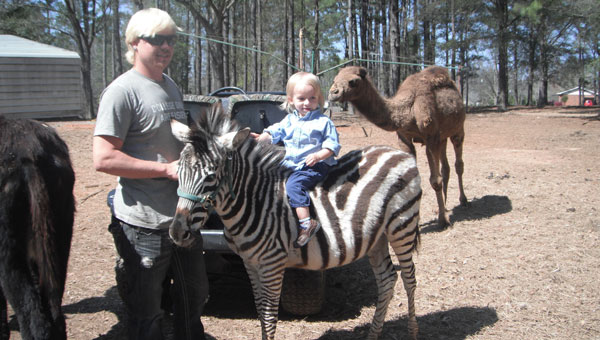 Blake McBee, owner of exotic animals in the “Wilsonville Zoo,” offers a zebra ride to a youngster. (Contributed)

If you have never met a camel face to face you may be as surprised as I was to see what friendly creatures they are.

They grow quickly and the two-and-a-half-year-old camels stand high above any adult, but are as loving as a small puppy. I was quickly greeted by them all and given lots of slobbery kisses!

As I was noticing the strand of drool leading from the camels mouth to my hair, I was greeted by the donkeys and zebras all nudging me for attention.

No one at the zoo ever tells you what personalities these animals have, and many people go home after a day at the zoo thinking to have exotic animals as pets is unrealistic, but this wasn’t the case for Blake McBee, and he gave us a chance to get up close with his hobby, which is now a daily event for him.

Blake McBee decided two years ago that he wanted a hobby of collecting exotic animals. Since then, he has been busy creating this dream. After researching the animal he wants, McBee travels to Tennessee, Georgia and Mississippi to get them; others that are further off he has shipped in. “We have been all over, I just decide I want something and go get it,” McBee said.

Blake explains he has always been an animal lover, but really likes things that are different and people don’t have.

On 50 acres of land in Wilsonville, McBee has anywhere between 50-100 animals at a time between making sales and breeding them. Currently, he has peacocks, water buffaloes, emus, pigs, camels, zebras, turkeys, chickens, roosters, sheep, goats, miniature horses, miniature donkeys, watusi and llamas. His shepherd dog also has fun roaming all the land around this mix of animals, which all get along. Blake has even owned animals as unusual as albino peacocks.

McBee enjoys renting out his animals also, and churches often will have live manger scenes with the camels during the Christmas season.

“They call it the Wilsonville Zoo” McBee jokes, although visiting McBee is actually much better than any zoo since we got to pet his animals.

It isn’t unusual for cars to slow down or even come to a stop and just look when they pass by McBee’s land.

The exotics are his favorites, and although McBee lives in Vestavia, he spends time with his animals daily.

He plans to continue this hobby long-term, and one day plans to have deer as well.