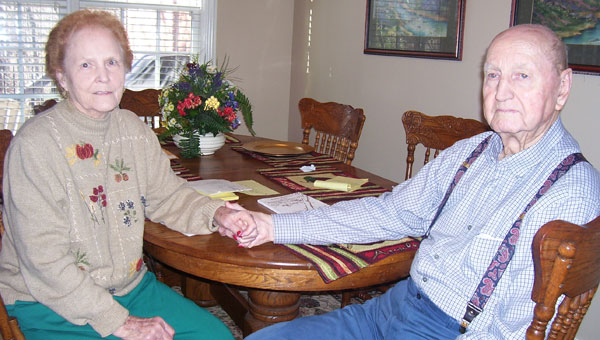 Esther and Frank Chesser Jr. recently celebrated 65 years of marriage. They share advice for a happy marriage from their home at Chesser Plantation in Chelsea. (Contributed)

Esther Lee Mizzell was 17 years old when she came to Chelsea from Chilton County to stay with her aunt and uncle and teach school.

That was in 1944, during World War II. Frank Chesser Jr., whose family helped settle the area, was in the Navy and had not been home for three years. But he returned on furlough and they met.

“His daddy had picked me out for him,” she said. “We had dinner at his brother’s house, then he went his way and I went mine.”

She did, however, talk to him on the phone from college in Montevallo, during that last year of his military service.

Frank Jr.’s father owned and operated a general store, which still stands at the corner of Shelby County 39 and 47. The family lived on the hill behind the store.

“Mama kept school teachers, four to six at a time,” Frank Jr. recalled. “As a kid, I had to bring in their firewood, and said I’d sure not marry a school teacher when I grew up.”

But it didn’t take long for he and the little red-haired school teacher to learn they were right for each other, they said. They were married February 16, 1946.

“We learned early in our married life that God is in control,” Esther said, “and He is the best source of help to help solve your problems.” Their family has always been deeply involved in the ministry of their church, Liberty Baptist.

After celebrating 65 years of marriage, the couple had this advice for young couples planning to be married: “Spend enough time together to get to know each other, your habits, beliefs and what expectations you are looking for, and most of all do you truly love each other?

“Married life is not just me, but us. You must be willing to give as well as take.”

And lastly, “Don’t begin married life with a big debt. Remember that it’s going to have to be paid.”

For the first year of Esther and Frank Jr.’s marriage, they lived with his parents. With money he had saved, they began building their own home on a hill behind his brother Lloyd’s restaurant, where they lived until seven years ago.

Doug Snider of Snider Pharmacy checks Angie Harmon’s blood pressure, one of the health and wellness services they will offer... read more