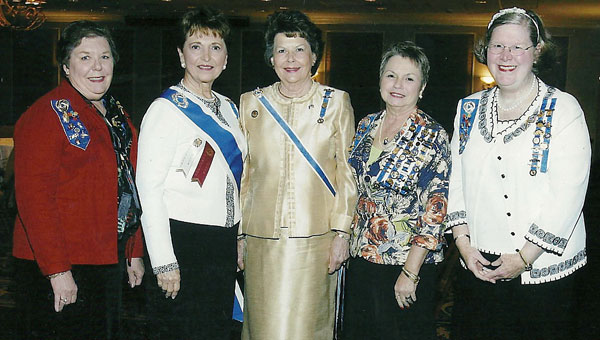 The 113th State Conference of the Alabama Chapter of the Daughters of the American Revolution was recently held at the Auburn Conference Center. More than 100 DAR daughters attended the conference.

The DAR began in 1890 and is a non-profit, non-political volunteer service organization open to women over age 17 who have a direct genealogical lineage to a patriot of the American Revolution, regardless of race, religion or ethnic background.

NSDAR President General Merry Ann T. Wright (North Carolina) was the honored guest. Her administration’s theme is “Preserve the past, enhance the present and invest in the future” and her symbol is three intertwined circles.

“I was invited by my paternal second cousin to the join the DAR,” said Wright. “I was not familiar with the DAR, so I asked my mother if she thought it would be a good organization to join. She completely encouraged me to become a member, even when she could not become a member because she did not know of a patriot in her family.”

Wright quickly became involved at the local level as a new member. Her first office was recording secretary of her local chapter. Wright would take her small children to the meetings and older members would babysit while she performed her duties. That local support was a key to her early involvement, and also a lasting reminder of the need for membership training and encouragement.

A genealogist surprised Wright by tracing her mother’s line and discovering three patriots. Her mother, unfortunately, had already died, but her sister became a member through that research.

“That was the best gift I have ever received,” said Wright.

Wright is proud of her Revolutionary War patriotic heritage and is honored to serve as NSDAR president general from 2010-2013.