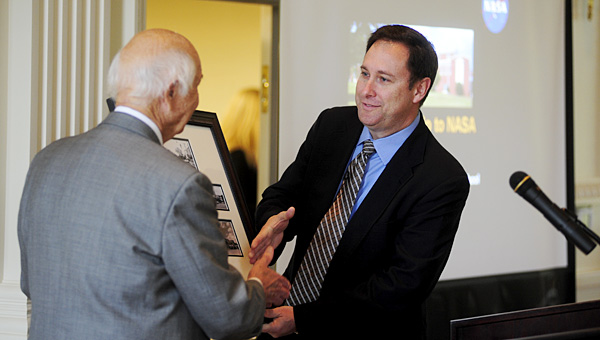 MONTEVALLO – The director of NASA’s Marshall Space Flight Center in Huntsville was recognized as a hometown hero at American Village March 29.

Robert Lightfoot Jr., son of Bob and Jean Lightfoot, became the director of the space center in 2009. The city of Montevallo chose to honor him in front of a group of Montevallo High School students from a senior government class, freshman forum and SGA leaders.

Montevallo Mayor Ben McCrory awarded Lightfoot with the title of “Hometown Hero,” as Lightfoot is an “example of what hard work and dedication can achieve,” McCrory said.

Lightfoot said he wanted to explain what he does and possibly help the kids decide what they wanted to do as future careers. He explained the responsibilities of the space center, and how those responsibilities directly impact the launching of spacecrafts.

After his presentation, Lightfoot asked the students for questions. One student asked if Lightfoot has ever been into space.

Another student quickly asked, “Do you believe in aliens?”

Lightfoot said he attributes his professional success to his Montevallo upbringing.

“I get asked a lot, ‘You’re from where?’ he said. “I am where I am because I grew up in Montevallo, not in spite of it.”

Lightfoot, a mechanical engineer, said his career choice came from great Montevallo High School teachers and a guidance counselor who pushed him into engineering.

“My whole journey started right here with people pushing me,” he told the high school students. “You’re in a good place. I promise you.”

A report released last week projecting 10,000 new jobs will come to Shelby County within the next 10 years is... read more