Carbon copy Players of the Year 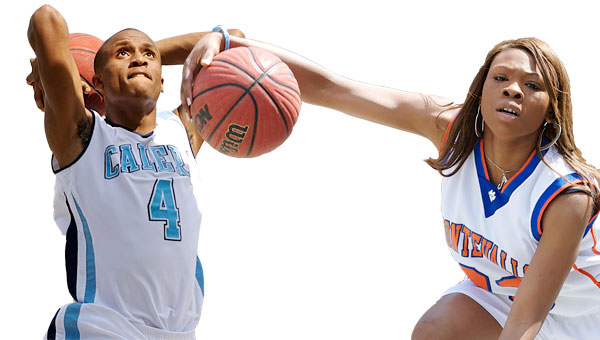 Haynes and Cardwell have been the best players on their respective high school basketball teams the past two seasons.

The duo resides in southern Shelby County basketball hotbeds. Each sharpened their skills on neighborhood courts against players much older with higher skill levels.

Haynes and Cardwell can add one more shared honor before they move on to their collegiate careers – 2010-2011 Shelby County Reporter Player of the Year.

Haynes is the boys’ basketball Player of the Year after leading the Eagles to a 23-9 record and an appearance in the Alabama High School Athletic Association Class 4A Central Region championship game.

Haynes, a point guard, did a little bit of everything for his team, which is evidenced by his per-game averages of 23.5 points, 3.1 rebounds and 4.6 assists. Haynes’ scoring average led all Shelby County players.

Haynes, who already holds scholarship offers from Georgia and UAB, is next in a long line of talented players from Calera.

Haynes wrapped up his junior season by earning a spot in the Alabama High School Athletic Association’s North-South all-star basketball game in Montgomery in July.

Cardwell earned the nod as the girls’ basketball Player of the Year for a second-consecutive year after leading Montevallo (15-11) to the AHSAA Class 3A sub-region playoffs.

Cardwell and her teammates were unable to get past Sumter County for the second year in a row, but the season-ending loss doesn’t overshadow what she meant to the Bulldogs.

Cardwell averaged a Shelby County best 24.8 points and 14.5 rebounds per game as a senior. The small forward, who rotated between the backcourt and the frontcourt, filled in wherever she was needed.

Cardwell will likely choose between college scholarship offers from the University of Montevallo and Shelton State Community College.

Cardwell’s success this season led to her being named a candidate for the Bryant-Jordan Athletic Achievement award in Birmingham next month.