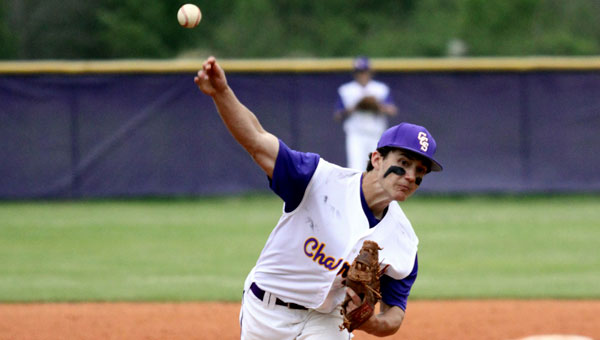 More often than not, the two-game series between the Chargers and the Rebels determines the area champion, and often even the Alabama Independent Schools Association Class 1A champion.

This year looks to be no different.

Cornerstone Christian took the upper hand early with a 5-4 win over Coosa Valley in the first of two games between the two schools March 29 in Columbiana.

Smith knows the score hasn’t been settled yet.

“We both know it’s coming down to us,” Smith said. “Next Thursday (April 7), we’ll settle it in Harpersville.”

The Chargers used their power to take down the rival Rebels in the first game.

Young, who drove in two runs and scored two runs, led Cornerstone Christian (12-4-1) as he finished 2-for-3 at the plate.

Davis picked up the win on the mound after giving up one earned run on four hits with five strikeouts and two walks in a complete game.

Jarrod Mims led Coosa Valley (23-4) at the plate with a solo home run and a double. Mims took the loss on the mound after giving up five runs on six hits.

The Chargers took a 1-0 lead following Young’s solo home run in the bottom of the first inning.

Coosa Valley responded with four runs in the top of the second inning, including Mims’ solo homer, to take a 4-1 lead.

Cornerstone Christian cut the lead to 4-3 heading into the fifth inning following solo homers by Davis and Young.

With two outs in the bottom of the fifth inning, Payne singled and moved to third base on a doubly by Wingard. Following an intentional walk to Young, Reither plated the game-tying run and game-winning run with his two-run single.

Carbon copy Players of the Year