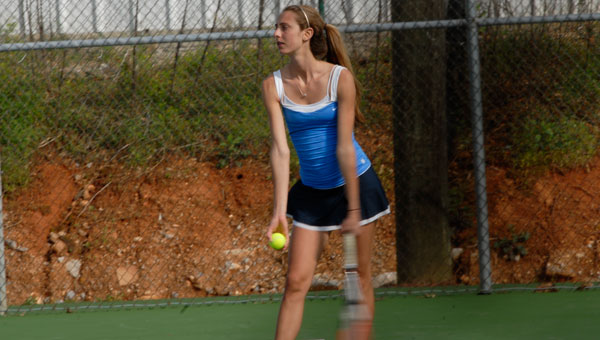 PELHAM — Indian Springs School senior Erin McMinn, a two-time defending champion at the Shelby County girls’ tennis tournament, wasn’t going to give up her title without a fight.

When opponent Katherine Combs of Briarwood Christian School took the first set 6-2, McMinn didn’t panic. McMinn responded by winning the second set 6-4 and clinched the No. 1 singles’ championship match with a 10-6 victory in a tie-breaker set to capture her third-consecutive title March 31 at the Pelham Tennis Center.

“I lost the first one and I kept telling myself, “I can win this,” McMinn said. “I tried to stay positive.”

McMinn knocked off Combs in the No. 1 singles’ title match, but it didn’t keep the Lions from capturing their third team championship at the Shelby County girls’ tennis tournament in four years.

“Our five seniors were focused and ready,” Laatsch said. “They were on a mission.”

Catherine Jordan and Bowers defeated Hendrix and Sorrell 6-1, 6-0 in the No. 3 doubles’ championship match.

Laurel Reeves of Oak Mountain captured the No. 8 singles’ championship following her 6-1, 6-3 win over Courtney Foster of Thompson in the title match.

The Eagles also won three of the four doubles’ championships.

Tomlinson and Reeves of Oak Mountain topped Siddle and Laura Nowell of Briarwood Christian 6-3, 6-3 in the No. 4 doubles’ championship match.