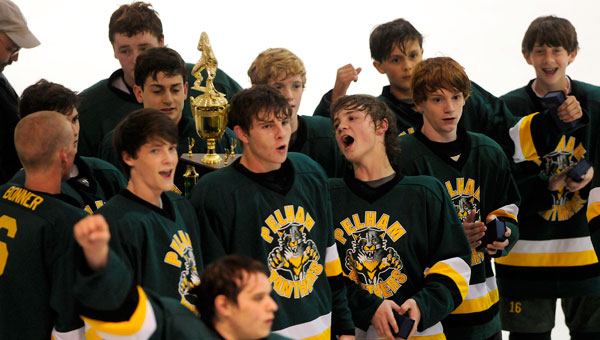 PELHAM — Devan Cooley of Chelsea made a statement on the ice as a member of the Pelham Panthers club hockey team March 31 with his two goals in the third period.

Following his performance, he made a statement to those in support of eliminating one of the two ice rinks at the Pelham Civic Complex.

“(The Pelham Civic Complex) is great because it’s the only place in Alabama south of Huntsville to play hockey,” Cooley said. “We’ve got kids from all over playing here.” 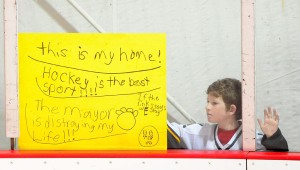 Pelham Youth Hockey League participant Ryan Scott made a sign to show his support for the league during the high school division championship game March 31 at the Pelham Civic Complex. (Reporter Photo/Jon Goering)

The Panthers jumped out to an early 2-0 lead with two goals in the opening period.

Cole Bower scored the first goal in the game, which was assisted by Jeffrey Johnson, with 6:56 remaining in the first period to give Pelham a 1-0 lead. Eugene Williams netted an unassisted goal with 31 seconds remaining in the opening period to push the Panthers’ lead to 2-0.

The Jaguars scored three goals within a span of two minutes in the second period to take a 3-2 lead.

Pelham goalie Zach Denny held off a late flurry of action by Spain Park forwards, including a shot by Sbrissa with seven seconds remaining in the game that missed wide right of the goal.

The championship game kept approximately 150 spectators, which included PYHL youngsters running around with home-made posters that read, “Save the ice, we love hockey,” on the edge of their seat for all 45 minutes. The game even included a scuffle in the tense final minutes. Spain Park’s Kneiss and Jesse Gendreau of Pelham were each sent to the penalty box with 3:23 remaining for their role in the tussle.

Logan Pichel, father of Spain Park forward Braden Pichel, hopes the Pelham Civic Complex will continue to house two ice rinks. Pichel said the PYHL would have to reduce its scope if it had to share just one rink with the public who want to skate recreationally.

“It means a lot of people that want to play hockey won’t get to play,” Pichel said.

Pichel and his wife Kristen, who is a member of the PYHL board, have two sons who play in the league. Pichel said he hopes Braden, who developed a love for the game of hockey during his childhood in Buffalo, N.Y., gets an opportunity to play hockey again next season in Pelham.

“The main thing is you want your kids to be active,” Pichel said.