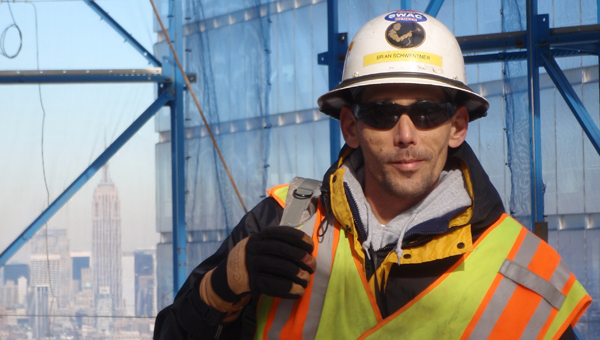 Calera’s Brian Schwentner pauses for a picture while working as an inspector on the New York/New Jersey Port Authority's redevelopment of the World Trade Center site in New York. (Submitted)

Nearly 10 years ago, Calera’s Brian Schwentner was on a passenger plane destined for Detroit. The plane landed in Dayton, Ohio.

Walking through the airport concourse, Schwentner passed the USO office, where he said he saw a muscled-up, tough-looking Marine gunnery sergeant watching a TV and crying.

For Schwentner, now 43, it wasn’t just an attack on the United States.

“I look at it as an attack on me personally,” he said April 1.

So when his company put out a bulletin for inspectors to work in New York as part of the New York/New Jersey Port Authority’s redevelopment project of the World Trade Center site, Schwentner jumped at the chance.

A senior inspector for Bureau Veritas North America, Schwentner said he was the only inspector from the company to accept the invitation.

Founded in 1828, the company helps clients with standards and regulations related to quality, health and safety, environmental and social responsibility. There are more than 100 inspectors in the Southeast region alone, he said.

Schwentner started the job in December 2010 and expects to be there for a year. 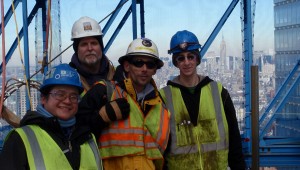 Calera’s Brian Schwentner (center with sunglasses) poses for a photo on the job site. (Submitted)

There are roughly 24 inspectors, representing several companies, at the WTC site, he said. A typical day on the WTC site includes looking over the shoulders of quality insurance inspectors to make sure the new structures are built according to Port Authority Plans, he said.

“We make sure they build it right,” he added.

One World Trade Center, the 9/11 Memorial and a WTC Transportation Hub are under construction. Schwentner has spent time on each project, but primarily deals with the transportation hub.

“This job site is so massive,” said Schwentner, who has worked in almost every state in the union, including Alaska, and several foreign countries. “I’ve never seen anything like it.” 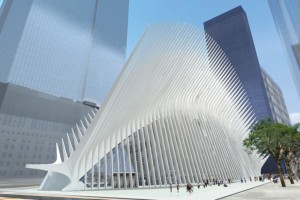 An artist's rendering of what the WTC Transportation Hub will look like when finished. (Submitted/Port Authority)

Schwentner’s family from Calera has travelled to New York several times to visit. He and wife Tracy have three sons: Canaan, 16, Nick, 14, and Logan, 10.

“It’s been a humbling experience,” Schwentner said. “It kind of gives me a good feeling. I’m glad I’m up here.

“I know New York and places up here have a bad reputation for rudeness and things like that, but that’s not true. The people here are fantastic.”

By BRAD GASKINS / Staff Writer The Shelby County Sheriff’s office is looking for a suspect who broke into a... read more