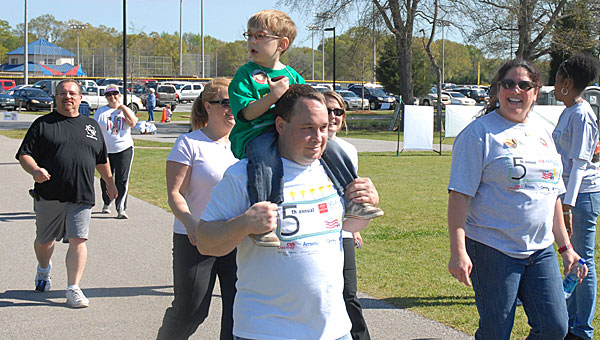 Stephen Blencowe carries his son, Carter, across the finish line of the Easter Seals Walk With Me event April 2 at Veterans Park in Alabaster. (Reporter Photo/Neal Wagner)

A smile spread across 6-year-old Riley Keough’s face as dozens of cheering spectators welcomed he and his parents to the finish line at Alabaster’s Veterans Park April 2.

“Did you have fun, Riley?” his mother, Lara, asked him after they finished the walk.

“Yep,” Riley quickly responded before sprinting to find his grandmother.

For Riley, who was born with severely underdeveloped muscles, had been looking forward to serving as a child ambassador at the Easter Seals’ Walk With Me event for several months, and was all smiles as he greeted those who came to the park to cheer him on.

“He has been all about hamming it up,” his father, David, said with a laugh. “He has gone to all the events leading up to this, and has enjoyed seeing himself on TV in the commercials.

During the event, more than 260 participants took a lap around Veterans Park to raise money for Easter Seals, which provides services such as speech and hearing therapy, physical therapy and early intervention programs for those with special needs.

The event raised more than $65,000, which will help the organization fund its programs throughout the Birmingham area, said Easter Seals of Birmingham Director of Development Kelli Keith.

The walk was the second Easter Seals event of the day at the park, and came after the organization’s first Run 4 A Reason 5K, which drew about 150 participants, Keith said.

The Alabaster Parks and Recreation Department donated use of the park to Easter Seals, which helped ensure all money raised will directly benefit the organization.

“One hundred percent of the proceeds from today goes to our speech and hearing therapy, occupational therapy, physical therapy and other programs,” Keith said. “If we didn’t have a successful event, we would have to think about cutting off some of what we offer.

“Today has been a huge success,” she added.

“She was born premature, and they didn’t give her much of a chance,” Krista said, noting Madeline also was a child ambassador for the event. “But we started going to Easter Seals in 2009, and now she is able to say 30 words independently.

“It means a lot to have family and friends take time out of their weekends to come out here and support us,” Smith added.