No fire museum in Civic Complex 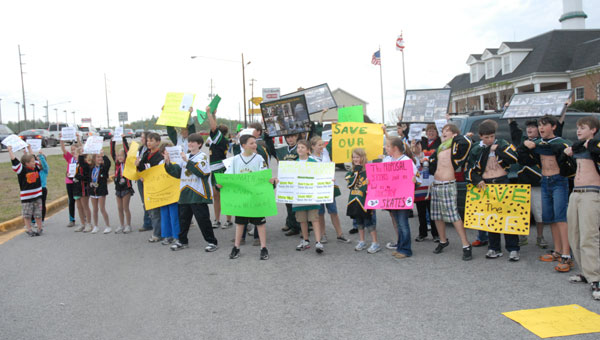 Pelham will not transform the Pelham Civic Complex main ice skating rink into a fire museum, and instead could locate the museum on Lee Street or construct a new building to house it.

The announcement came after the Pelham City Council voted in its work session to remove a resolution from the night’s agenda pertaining to the museum.

If the resolution had remained on the agenda and passed, the city would have moved forward with plans to seek the museum in the main rink.

“I received numerous emails, and I’ve gotten a lot of calls about it,” Pelham Mayor Don Murphy said to nearly 100 meeting spectators, most of whom were affiliated with the city’s hockey and ice skating leagues.

Murphy’s comments came one week after the council announced it was considering housing the museum in the main rink, which would leave only the facility’s practice rink open for skating and hockey.

Murphy said the city originally planned for the Birmingham Bulls hockey team to relocate from the Birmingham-Jefferson Convention Complex to the Civic Complex. When the move did not materialize, it put Pelham “in a bind,” Murphy said.

The city soon may raise the price of ice use to help make up the deficit, Murphy added.

Shelby County currently is considering proposals from Pelham and Calera to house the museum, and County Manager Alex Dudchock said he plans to make a decision by April 8.

Since submitting the main rink to house the museum, Murphy and the council members said they had received “hundreds” of emails opposing the plan.

Because the city eliminated the Civic Complex as a possible venue for the fire museum, the county will consider the other two proposed sites Pelham submitted. One is the 30,000-square-foot former Marvins Building Supply building on Lee Street and the other proposal would require the city to build a 40,000-square-foot new facility near the intersection of U.S. 31 and Amphitheater Road.

“You’ve always got to have a backup plan,” Murphy said after the meeting.

During the meeting, several speakers addressed the council and voiced support for the Civic Complex and its ice programs.

“Mr. mayor, thank you for your invitation,” said Tony Harlow, a coach with the Pelham Youth Hockey League. “We want the ice, and we want to get out there and show you we want it. We want this place to do well too.”

Hoover resident Mike Kirkpatrick, whose children participate in the Pelham ice skating and hockey leagues, said the city should do more to market the facility, and said closing the main rink would have negatively impacted local residents.

“If you guys had moved forward with this tonight, you would have almost ensured nobody from Pelham would ever wear red, white and blue in the Olympics,” Kirkpatrick said.

Council President Mike Dickens said the city turned a “huge negative” into a positive by working with the ice program participants, but said the city must take steps to address the facility’s cost.

“Talk is cheap, and we need you to help us come up with real answers to a real problem,” Dickens said. “Let’s work together, and let’s get this thing turned around.”