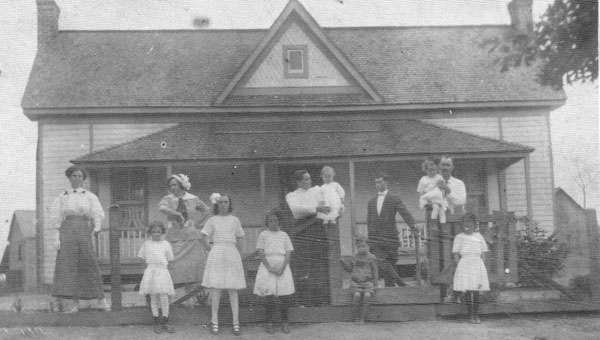 Renovations are nearing completion on the building that an early Chelsea family once called home, and that will now house the new Chelsea City Library.

“I think the library being in the oldest home in Chelsea will add character to it,” said Mayor Earl Niven. “We’ve added a children’s room and a reading room.”

With the new room on the back of the house, it looks as 90-year-old Frank Chesser, Jr. recalls it looking when his Crane grandparents lived there. “It had a kitchen on the back,” he said.

Several years ago, while doing research for a Shelby County Reporter article and a book of local history, I had opportunity to talk with Chesser’s mother, Dovie Crane Chesser, about these early settlers to our area.

Long before Chelsea came into being, Mrs. Dovie told me, her grandfather John Franklin Crane had a log house at Crane’s Gap, near the intersection of present-day Highway 280 and Chesser/Crane Road. It had been there for around a hundred years, she said.

“The first year Mama and Papa (Olivia and John William) were married, they had a little farm up on Bear Creek Road,” she recounted. “I was born up there (in 1890). Then they moved down here and bought the place they lived on all their lives.” (Their house, the new Chelsea library, is located at the back corner of the City Hall parking lot.)

Mrs. Dovie recalled that “Mama” (Olivia) was the strongest thing! “I’ve seen her out hoeing before a baby came, and Papa would go get the old granny woman and her out in the field. Then, she would be back working in three days.” Olivia and John William Crane had thirteen children.

But the hard work and numerous births didn’t seem to hurt her. “If Mama had lived three more months, she would have been a hundred years old,” Dovie Chesser said.

They and several other family members are buried in old Quinn Graveyard at Chelsea.

According to Mayor Niven, the new library in the old Crane home is set to open in May.

Esther and Frank Chesser Jr. recently celebrated 65 years of marriage. They share advice for a happy marriage from their... read more