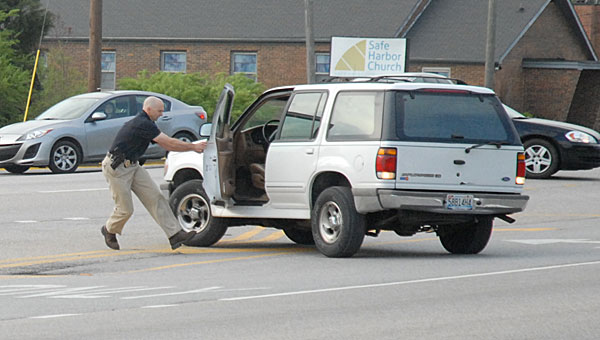 Pelham Police were forced to shut down all four lanes of traffic on U.S. 31 at about 5:30 p.m. April 4 after an unmanned white Ford Explorer, traveling in reverse, began making loops in the middle of the road.

The incident happened after the driver of the Explorer was leaving a parking lot near the intersection of U.S. 31 and Shelby County 68 and noticed a ball bounce away from a pair of children playing near the side of the road.

When the ball bounced onto the busy street, the driver became concerned the children may run after the toy, so she pulled the Ford onto the paved median between the Staples office supply store and the Sonic restaurant, said Pelham Police Capt. Larry Palmer.

“She got out, and thought it was in park, but it was actually in reverse,” Palmer said. “When she let her foot off the brake, the car took off, and she fell down and got scratched up pretty bad.

“Apparently, when she was falling out, she grabbed the steering wheel and turned it all the way to one side,” Palmer added. “It started making perfect circles in the middle of the road.”

Pelham Police officer Jeremy Eddy and other officers were near the scene, and were able to clear a perimeter around the out-of-control vehicle before any property damage occurred, Palmer said.

Because the incident happened during rush-hour traffic, many drivers pulled into a parking lot and gathered on both sides of the road.

After the Explorer circled unoccupied for about 10 minutes, Eddy was able to open the Ford’s driver door and leap into the vehicle while it continued to circle. Eddy then reached the ignition and disabled the SUV, which drew cheers and applause from onlookers gathered at the scene.

“The only time I’ve ever seen anything like that happen, the car just goes off in a straight line and ends up in a ditch,” Palmer said. “It’s amazing that this vehicle went around in such a perfect circle. I believe it would have kept going until it ran out of gas.

“I’m proud of the guys who got it under control,” Palmer added. “They came up with a plan, and they executed it perfectly.”

By NEAL WAGNER / City Editor The new senior pastor at one of the county’s largest churches said he is... read more