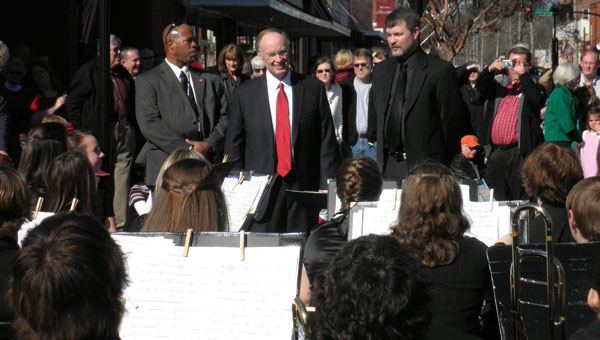 Alabama’s new governor, Dr. Robert Bentley, grew up in Columbiana. He graduated from Shelby County High School, where he was president of the student body his senior year, a precursor of greater things to come. After high school, Bentley graduated from the University of Alabama and medical school.

In the inauguration parade in Montgomery, the University of Alabama Million Dollar Band led the procession followed by Bentley and then the 116 member SCHS Marching Band, an honor and tribute to Bentley’s alma maters.

“It was a once-in-a-lifetime thing,” said senior trombone player John McDaniel, “to be able to say that our band followed the governor who graduated from our high school.”

“It was extremely special to represent our school and community,” said senior trumpet player Daniel Porter.

At the Shelby County Historical Society’s tribute to Bentley on Shelby County’s 193rd birthday celebration, Bentley specifically asked to be able to speak to the students of the SCHS band.

Because of time restraints at the inauguration, Bentley was not able to talk to the band.

Bentley was greeted by the 66 member SCHS Symphonic Band playing in front of the Old Courthouse.

He personally spoke to the band members and said how proud he was of them.

“Gov. Bentley personally claimed the SCHS Band as his own,” said junior clarinet player Rachel Cole. “It was humbling for the governor to take his time to personally talk to us.”

The SCHS Marching and Symphonic Bands have been directed by Tom Grigsby for the last 14 years.

Grigsby graduated from Jacksonville State University with a double major in trumpet and piano, and was a member of both his high school and college bands.

He lives in Columbiana with his wife and two children.

“This band has a strong sense of family,” Grigsby said. “The kids are friends, and I feel like they are my kids, too. We are a very good band.”

The walls of the band room are lined with trophies and a huge banner exclaiming that this is the “Pride of Shelby County.” At the recent Music Performance Assessment, SCHS won all superiors. Grigsby said that the band repeatedly wins superior ratings.

The Symphonic Band, along with the Columbiana Middle School band led by Leah Seng, will hold its spring concert Sunday, May 1 in the SCHS gym at 3 p.m. Come and hear the Pride of Shelby County.