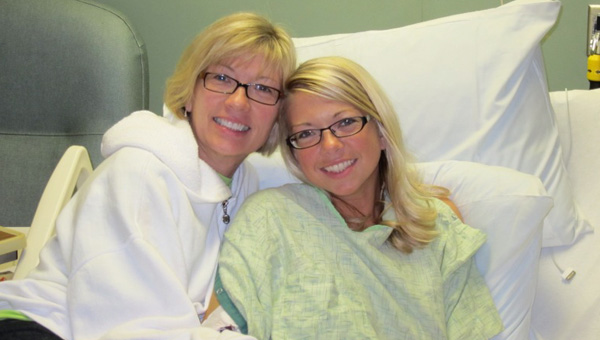 Brittany Stoltz (right) gets a hug from her mom, Lee Stoltz, before undergoing a small bowel resection in May 2010. Now, Brittany and Lee are teaming up to run a half-marathon to raise money and awareness for the Crohn's and Colitis Foundation. (Contributed)

Never mind that she was an accomplished high school athlete and played Division I women’s soccer in college, the thought of a 13.1-mile jog never crossed her mind.

Her mindset changed when she was diagnosed with Crohn’s disease.

Now, the 27-year-old has partnered with her mom to raise money and awareness for the Crohn’s and Colitis Foundation by running June 4 in the Virginia Wine Country Half-Marathon.

Crohn’s is an inflammatory bowel disease.

“The bad thing is a lot of people don’t like to talk about it because of some of the embarrassing side effects,” Stoltz said April 6. “I hope that I can help other people get help and realize the disease doesn’t have to control them.”

She now lives in Mobile, where she works as a leasing and marketing specialist for an apartment community. Her mom and dad, Lee and Marlin Stoltz, live in Calera.

Her mom is a registered nurse at the Alabama Digestive Health and Endoscopy Center in Birmingham, which turned out to be a blessing when Brittany Stoltz started experiencing stomach pains in December 2010.

She was diagnosed with Crohn’s in late April 2010 and in May underwent a small bowel resection that kept her in the hospital for 10 days and out of work for two months.

“I didn’t really have time to think about it,” Stoltz said of the quick diagnoses and surgery. “Once it was over, it was ‘what do I do now? How do I give back?’”

Stoltz said she found an ideal avenue in running a half-marathon with Team Challenge, the Crohn’s and Colitis Foundation’s endurance training and fundraising program.

Through Team Challenge, Brittany and her mom have conference calls with coaches twice a week to receive advice and review the training schedule. They run at least three or four times a week.

Right now, Brittany and Lee Stoltz are running 5 miles two times a week. They run about 8 miles on weekends.

Their goal is to raise $6,000. They’ve already raised about half that, and 80 percent of every dollar raised goes directly to the Crohn’s and Colitis Foundation.