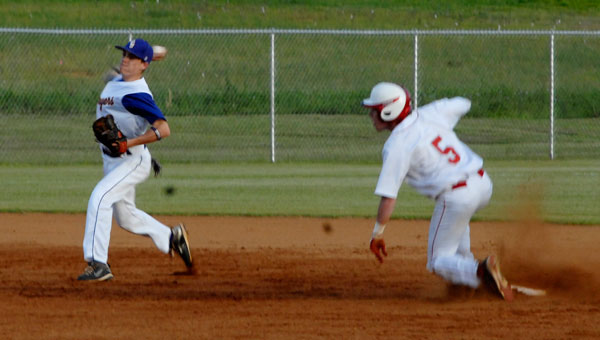 The number of games between the two teams could grow to six before the end of the 2011 season.

Following a 5-4 win by Cornerstone Christian in the first meeting March 29, Coosa Valley evened the series with a 5-3 win over the Chargers in the second meeting April 7 to force a one-game playoff to determine the Alabama Independent Schools Association Class 1A, Region 2 — Area 1 champion.

The deciding third game, which will determine which team will have home-field advantage in the playoffs should the two teams meet, will be held April 11 at a neutral site at Central Alabama Community College in Alex City at 4 p.m.

“We’re both going to be there,” Hughes said. “We want to play at home in the playoffs.”

Coosa Valley, which jumped out to an early 5-0 lead after scoring four runs in the bottom of the fourth inning, racked up seven hits in the victory.

Senior John Bullen, who reached base in all three plate appearances, led the Rebels’ offensive attack at the plate as he finished 2-for-2 and scored two runs.

Daniel Kennedy earned the win after giving up three earned runs on 10 hits with four strikeouts and a walk in a complete game.

“Daniel is always going to give you a chance to win,” Hughes said. “He’s a competitor. He’s been in tight games and he knows what to do.”

Adrian Young, who drove in one run and recorded a stolen base, led Cornerstone Christian as he finished 2-for-4 at the plate. The Chargers finished with 10 hits in the defeat.

Davis took the loss on the mound after giving up five runs, including three earned runs, on seven hits with a strikeout in a complete game.