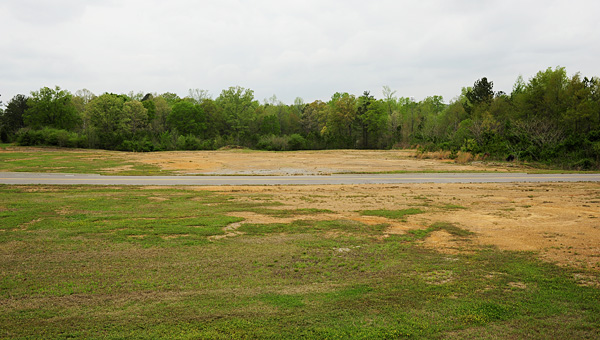 The site where Shelby County's proposed fire museum could be built in Calera is located off of Alabama 25 near the intersection with I-65. (Reporter Photo/Jon Goering)

CALERA – Calera Mayor Jon Graham said Friday afternoon that he has “an indication” on where Shelby County’s proposed fire museum could be located.

Calera leaders were scheduled to meet with County Manager Alex Dudchock at 11 a.m. to learn whether the county would consider a joint venture with Calera or Pelham.

Graham said afterwards that a decision would be announced at Monday morning’s county commission meeting. Graham said that while nothing is official yet Calera is “very excited about our position and the good things to come.”

When contacted Friday afternoon, Dudchock said he would make an announcement at the commission meeting.

If approved by the county commission, the county and Calera would move forward with the joint venture to construct in phases an eventual building of approximately 40,000 square-feet on 4.35 acres of land on Alabama 25, about two blocks from Interstate 65 exit 228.

With the commission’s approval, the county would use $500,000 in lodging tax revenues for an initial investment and contribute $35,000 annually before eventually “minimizing county funds” for the project, Dudchock noted in a written evaluation of Calera’s proposal.

It would cost an estimated $750,000 to complete a 15,000 square-foot “building shell,” Dudchock noted in a written evaluation of Calera’s proposal.

The fire museum would be located next to the Chevron station on Alabama 25, about a half-mile from the Heart of Dixie Railroad Museum.

Pelham submitted three proposals for the project, including one to convert the main arena of the Pelham Civic Complex into a fire museum.

That proposal would have given the county 38,000 square-feet of space to open the fire museum as early as next year. Pelham Mayor Don Murphy previously said the civic complex is losing more than $950,000 a year.

Pelham was set to vote on converting the complex five days before Dudchock said he would announce his decision. Pelham backed down on its proposal amid strong protest, primarily from city hockey and ice-skating clubs who use the main ice rink.

In removing the complex as an option, Murphy said Pelham would pursue locating the fire museum at two “back-up” locations.

Proposal “B” was an existing 30,000 square-foot building, formerly occupied by Marvins Building Supply, located on 5.68 acres on Lee Street. This option would have required the city to lease or purchase the property and renovate the building’s interior.

Proposal “C” was to acquire 7.59 acres near the corner of Highway 31 and Amphitheater Road and construct a 40,000 square-foot building.

Pelham cancelled a special-called council meeting April 6 to consider a property purchase. Murphy would not confirm if the property purchase item on the agenda was related to the fire museum.

Dudchock previously said that at least two of the historic fire engines donated for the museum will be parked outside the County Administration Building when the commission meets at 8:30 a.m. for its regularly scheduled meeting, followed by a work session.