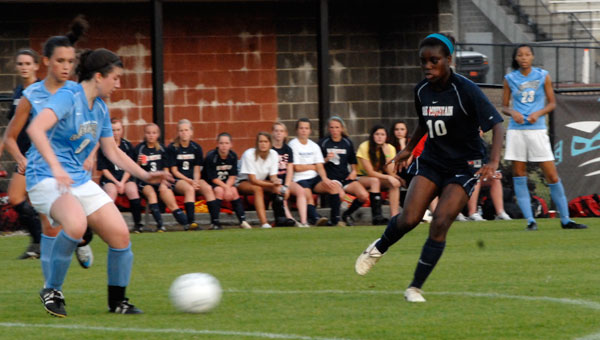 Vice versa for the Eagles.

The rivalry between the two schools has blossomed on the soccer with field with the Eagles and the Jaguars routinely battling each other for a section championship and a trip to the AHSAA Class 6A state tournament.

“We’ve got too much history and we’re too close,” said Spain Park coach Robert Starr. “It’s a fun rivalry. These are the games they’ll always remember.”

The game Friday night at the Spain Park soccer complex will be known for the defensive battle in the final 40 minutes.

Spain Park sophomore forward Simone Charley netted a goal, which was assisted by Annalika Steyn, in the opening half to account for the only offense in the section match.

The second half turned into a defensive struggle featuring physical play on both sides. The half featured diving saves by both goalkeepers — Jill Hester of Oak Mountain and Schyler Arnold of Spain Park — and missed opportunities on corner kicks. Hester finished with six saves. Arnold posted five saves in the shutout.

The Eagles (12-3 overall, 5-2 in Class 6A, Section 5) had plenty of chances to score an equalizer, but the final opportunity came and went when the Spain Park back line cleared away a corner kick with one minute remaining in the contest.

Rian Imwalle scored the game-winning goal for the Eagles (12-3 overall, 5-3 in Class 6A, Section 5) in the second overtime following a scoreless tie in regulation and the first overtime period.