Group breaks ground on house for family hit by tragedy 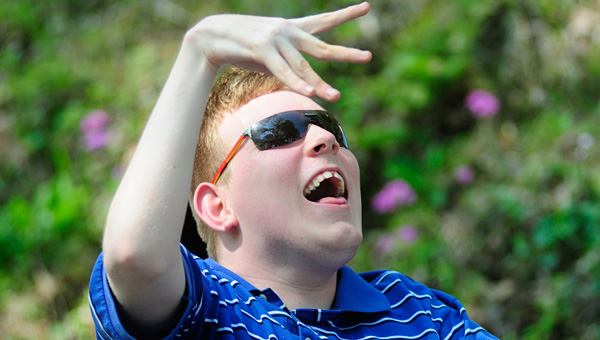 Josh Carden laughs while chatting with family and friends during the groundbreaking on April 9. (Reporter Photo/Jon Goering)

The clanking of a rolling bulldozer and the cracking of falling trees filled the air April 9, as a volunteer group began work on a new house for a family struck by a recent tragedy.

“This is a great day,” said Thompson High School senior Josh Carden. “That (lot) won’t have trees there for long.”

On Dec. 6, 2010, Carden’s 73-year-old grandfather, Tommy Pickett, died after he was struck by a vehicle while crossing the road in front of his house on Fulton Springs Road to help Carden cross the street.

After hearing about the accident, during which Carden lost his primary caregiver, several local volunteers began looking for ways to help the family. Following the accident, students at THS raised more than $12,000 in a matter of days to help Carden and his grandmother with immediate needs and Christmas presents.

“If high schoolers can go in and raise $12,000 in three days, we can build (Carden and his grandmother) a new house,” said volunteer Lori Turner. 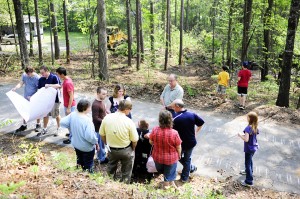 Friends and family of Josh Carden gather at the site where the house for Carden is to be built in Alabaster. (Reporter Photo/Jon Goering)

Turner and other volunteers originally planned to renovate Carden’s current house on Fulton Springs Road, but zoning laws and building codes prevented them from working on the house.

The volunteers then began looking for land to build the family a new house. Because Carden’s current house is in a commercial zone, the volunteers were able to negotiate a land swap with Alabaster resident Rick Blaising.

Through the swap, Blaising gave the group a quiet plot on Washington Lane, which is off Butler Road in Alabaster, in exchange for the family’s current property.

After negotiating the land swap, the volunteers began seeking material donations from area companies, and enlisted the help of general contractor Jack Donovan.

Because Donovan and Carden both use a wheelchair for mobility, the contractor was able to design the new house specifically for Carden’s needs.

“The floor plan is built especially for him. We can not wait until this house is completed,” Donovan said.

In addition to an open floor plan designed to give Carden room to maneuver easily, the single-level, 2,500-square-foot house will also include a storm shelter room to provide extra safety.

“Josh has a severe fear of thunderstorms, so the plans include a safe room in the middle of the house,” Turner said. “The entire room is surrounded by reinforced concrete, so he will be very safe in there.”

“That’s a place I can go in when it storms,” Carden said, noting he “blew the other racers off the trail” en route to a victory during Alabaster’s Special Olympics at Veterans Park the previous day.

The volunteer group has been able to secure monetary and material donations from local citizens and businesses, but still has many needs before the house can be completed. The group’s most pressing needs are a wooden house framework package and concrete and labor for the house’s foundation.

“Our goal is that the family will only have to bring their pictures and clothes with them when they move in,” volunteer Jeff Brooks said, noting the group will work to have the house completed before Carden graduates May 25.

For a complete list of the group’s needs, visit Facebook.com/Joshproject.