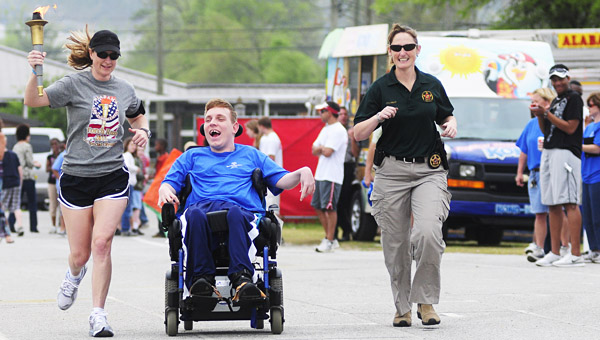 Josh Carden, center, is accompanied by Shelby O'Connor of the Shelby County Sheriff's Department, right, and Debbie Warner of the Pelham PD during the opening ceremonies of the Special Olympics event at Thompson High School in Alabaster on April 8. (Reporter Photo/Jon Goering)

ALABASTER – Athletes from all over Shelby County beamed as they paraded through a crowd of family and friends to the opening ceremony of the Special Olympic track and field event at Thompson High School April 8.

“The students have to participate in an event before they can compete at the state games in Troy,” said Patsy Maner, an adaptive physical education teacher for Shelby County.

Maner said the students’ ages ranged from elementary-age children to graduates who came back to participate in the Special Olympics. 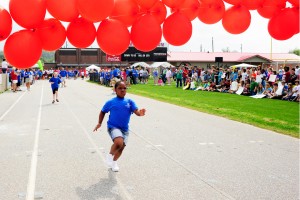 Nykia Gray looks up at the balloons that mark the finish line during a 50m race during the Special Olympics event on April 8 at Thompson High School in Alabaster. (Reporter Photo/Jon Goering)

Tracy Carter attended the event to watch her 12-year-old son, a student at Thompson Intermediate, compete in the 200-yard dash and softball throw.

“He looks forward to doing this every year,” Carter said. “It’s something they don’t usually get to do, and a lot of the kids are in wheelchairs.”

Felicia Fenley sat on the bleachers and waited to watch her son, Taylor Gannon, compete in the Special Olympics.

“He’s just ready for things to get started,” Fenley said of Taylor, as he sat watching the opening ceremony come to a close. “The kids get a lot of experience from (the Special Olympics). They exercise and get exposure to other kids with special needs.”

State Sen. Cam Ward, R-Alabaster, said the Special Olympics event was “one of the most special events year-round.”

“These kids don’t get much attention in the community, and this is a special day for them to enjoy themselves,” Ward said, smiling. “It’s inspirational; that’s why I come out every year.”