If the name Ronnie Rasp is not familiar to you, you probably weren’t in the Alabaster area in the early to mid ’80s — or at least you had no connection to Thompson High School baseball.

The pitching ace at THS was a long-legged, handsome young man by the name of Ronnie Rasp.

Born in Jackson, Ohio, Rasp, his parents, and two older brothers, Rodger and Mike, moved to Alabaster when Rasp was 3-1/2 years old. His dad, Larry, had played some semi-pro ball in Ohio and was coach to his son as soon as Rasp turned 6.

Rasp said his dad was a perfectionist, always demanded 110 percent. His dad coached him through “Pony League” to junior high. Rasp played junior high basketball and ninth grade football but always knew his heart and talent were in the field of baseball. During his high school career, he recorded a won-loss record of 35-5 in three years. He broke several records, recorded 14 straight strikeouts in one game and played in the East-West All Star game. He then wound up at Wallace State in Selma.

In 1985-86, Rasp was at Wallace State, then transferred to the University of Montevallo, where he played for the Falcons in 1987-88.

The Chicago Cubs drafted Rasp as the 31st selection and the baseball travel life began.

Phoenix, Ariz., his favorite city in the U.S., was home to spring training. Rookie ball was in Whitfield, Va., and Single-A ball (South Atlantic League) was in Charleston, W.Va., where he met Stephanie, who in 1990 became his wife. 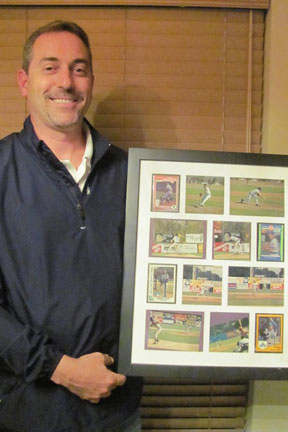 Ronnie Rasp with memorabilia from his baseball career at Thompson High School in the mid 1980s. (Contributed)

The third place he played was a split season — half in Peoria, Ill., and half in Winston Salem, N.C.

During this time, UPS had a “working agreement” with the minor league teams to allow their players part-time or off-season employment to subsidize their very small salaries.

In a fluke unloading accident, Rasp crushed his “pitching” finger. Goodbye baseball. His “ball control” was over.

“I can still throw as hard as ever, I just don’t know where the ball is going to wind up,” Rasp said.

Rasp attended classes at West Virginia State, came back to the University of Montevallo, did his student teaching at Calera and graduated in 1992. He did construction work from 1991-1994.

In 1995, Rasp began coaching at Davis Middle School (football and baseball) and in 2007 moved to Jess Lanier High School with his high school coach, friend and mentor, Billy Woodham.

In three years, Woodham and Rasp’s team had a 27-7 record, twice went to the second round of the state playoffs and both times lost to the final winner.

Last year, Lanier announced they wanted to go in a different direction and the “extra coaching supplement” was cut to a bare bones minimum amount. Attempts to reconcile differences were not successful. Rasp misses “his boys” and only teaches physical education now. Still, he tries to instill in the students a sense of “believe in yourself, push harder and keep going.”

Children Hunter, 13, and Meredith, 8, keep him busy. He still finds time for hunting in Wilcox County, fishing on Lay Lake, rooting for the Texas Rangers and dreaming of a trip to Alaska.

Hunter is very involved in soccer and Meredith loves choir, soccer and baton.

Still displaying the same courteous manners and winning smile he had 25 years ago, Ronnie Rasp is not a “has-been” but a “fond remembrance” for many of us.