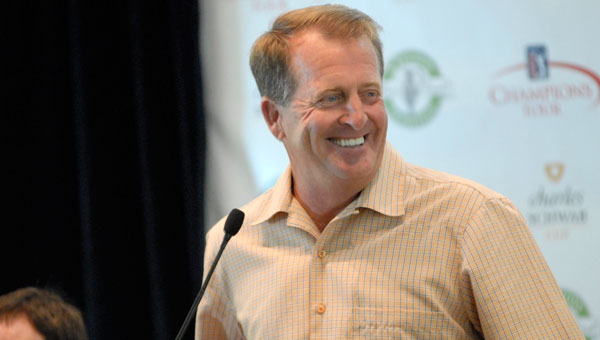 Fred Funk, the defending champion of the PGA Champions Tour's Tradition, smiles in response to a joke by Shoal Creek board member Mike Thompson during the event's media day April 11 at the Shoal Creek Town Hall. (Reporter Photo/Wesley Hallman)

A friendly chit chat between Shoal Creek board member Mike Thompson and professional golfer Fred Funk set the stage for a challenging tournament ahead May 3-8 at the prestigious golf course in north Shelby County.

Thompson announced the length of the course will be a record 7,234 yards during the Regions Tradition, the first major on the PGA Champions Tour and Shoal Creek’s first major professional tournament since the 1990 PGA Championship, during the event’s media day April 11.

“Did you forget we’re old?,” quipped Funk, a 55-year-old who is the Tradition’s defending champion after winning the 2010 event at Crosswater Club in Sunriver, Ore.

Thompson, the son of Shoal Creek founder Hall Thompson, said everything is on track for the tournament with amenities and bleachers being added daily around the course.

Stevens thanked the tournament’s volunteers and said he was pleased with the progress the tour has seen at Shoal Creek.

“It was an easy decision to want to bring championship golf here,” Stevens said.

Funk is among the cream of the crop in a field that is expected to be one of the biggest draws during the 2011 Champions Tour season.

Funk, who finished fourth in the 2002 PGA Championship, said he believes a challenge awaits the field in Dunavant Valley.

“It looks like a beautiful golf course,” Funk said. “You just hope it’s not as hard as it looks.”

Funk said he expects a challenge in repeating as the Tradition champion.

“The guy that wins it is going to be the guy that’s playing his best,” Funk said. “You don’t fake it on courses like this one. It will take it to a whole different level. It didn’t have that feel in Oregon. You do get that feel here.”

Thompson also announced two golfers who made their names well known during professional golf’s last two visits to Shoal Creek will get a sponsor’s exemption to play in the Regions Tradition.

“We’re really excited to have Wayne and Lanny,” Thompson said.

Thompson has already picked out his favorite in the field.

“My money’s on Funk,” Thompson stated during media day.

The 2011 Regions Tradition is in its first year of a three-year contract at Shoal Creek with primary sponsor Regions Financial Corp. For tickets and more information, visit RegionsTradition.com.