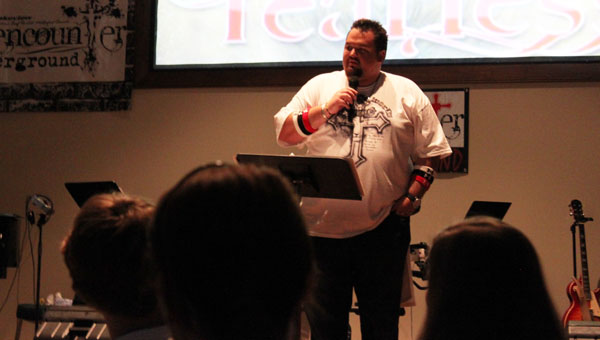 Youth Pastor Garrett Harbuck speaks to youth and adults alike about the importance of being fearless during Encounter Underground April 10. (Reporter photo/Christine Boatwright)

The informal, non-traditional Sunday evening service is the brainchild of Youth Pastor Garrett Harbuck and members of his youth group.

When Harbuck took over the youth pastor position a year ago, the youth group only offered a Wednesday night program to the eight to 10 kids in the youth group. Harbuck said he took the initiative to “get out there and support the kids” in extra curricular activities, to get to know the kids personally.

The idea of a Sunday night service was put on the backburner as Harbuck worked to grow the numbers of his youth group. Finally, Encounter Underground began when one of the students in the youth group spoke to Harbuck.

“One of the youth group members said, ‘We’ve got to do something on Sunday nights. I’m tired of driving by the church and seeing the lights out when other church parking lots are full,’” Harbuck said. “That’s when I decided to put feet to this.”

Harbuck began talking to students about how to create the type of service he envisioned. He began by asking musically gifted students to form a band to lead worship for the services. 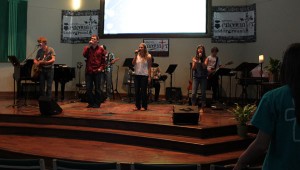 “I started asking how we approach this service. We decided to open it to everyone, but keep it youth-driven,” Harbuck said. “Instead of just being another service, I wanted to make it a mission statement. I said we should gear it toward a theme of an underground church.

The first service took place March 27, and it had more than 70 people attend.

“It’s been great. There’s been a presence like I’ve never felt in any service before,” Harbuck said. “Everybody from church is coming together. We didn’t want it to be like any other service.

“There’s not a flow to the service; we just let God take control.”