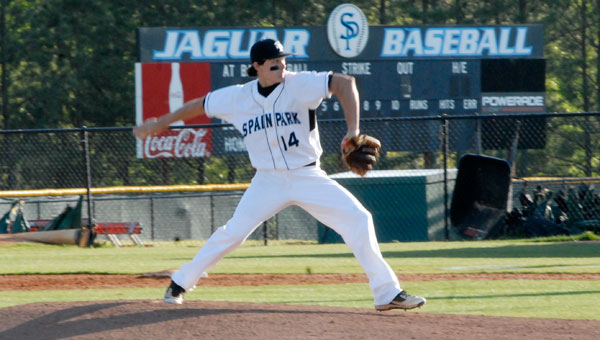 HOOVER — The Spain Park High School baseball team entered the week with two chances to seal an Alabama High School Athletic Association Class 6A playoff bid and a share of the Class 6A, Area 12 regular season championship in its final two area games against Vestavia Hills.

The Jaguars are down to one chance in their final Class 6A, Area 12 contest against the Rebels following an 8-3 loss to Vestavia Hills in the series opener April 12.

“They were the better team tonight,” Smith said. “We’ve got to play better Thursday.”

Spain Park fell behind in the top of the first inning following a two-run homer by Georgie Salem of Vestavia Hills.

Spain Park scored its first run of the game in the bottom of the fourth inning when Mikey White knocked a single to left field and scored on an RBI double to right field by Chris Ellis. However, the inning ended with Ellis being called out at third base after trying to turn the double into a triple.

Vestavia Hills plated three more runs in the top of the sixth inning to extend its lead to 8-1.

The Jaguars responded with a pair of runs in the bottom half of the sixth inning to cut the deficit to 8-3.

Carter White led off the inning with a single to right field and scored on Mikey White’s two-run blast over the left field fence. White’s homer was his fifth of the season.

However, the Jaguars left the bases loaded in the inning when Austin Veteto grounded out to first base to end the threat.

Nathan Brock led off the bottom of the seventh inning with a single to right field. Vestavia Hills made a pitching change and Salem, a University of Alabama baseball commitment, struck out all three batters he faced to end the game.

Charlie McPherson started on the mound and took the loss after giving up four earned runs three innings.

Veteto allowed five earned runs in three innings in relief before Dustin Cowart closed out the game in the seventh inning.

“We weren’t able to stop the bleeding,” Smith said.

The Jaguars have been shorthanded in area play due to an injury to Ellis, an Ole Miss signee. Ellis entered the season as the Jaguars’ pitching ace, but he hasn’t been a factor in area games due to his injury.

“It’s kind of the cards we were dealt,” Smith said.