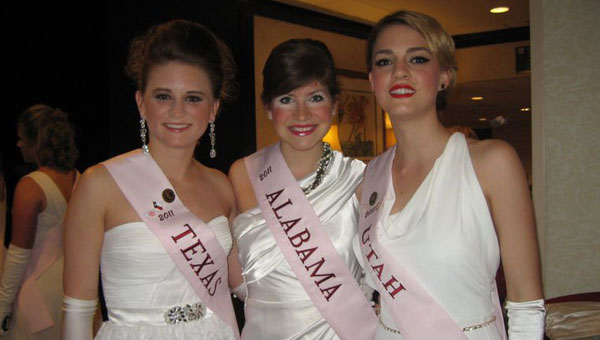 “They choose an individual from each state,” Fisher said. “The girls are nominated by the state society. People vote on who they want. After that, whoever has the most votes wins.”

After being selected, the princesses from each state participate in a number of events to celebrate the gift of 3,000 cherry trees from Japan to the United States in 1912.

“We went to the Japanese embassy one night. We had the grand ball on Saturday (April 9), parade on Sunday (April 10), and at the congressional reception on Wednesday (April 6), Senator Shelby escorted me,” Fisher said. “There’s sushi all week, of course. The parade was great; it was chilly.”

The 2010 Cherry Blossom Queen and the newly named 2011 queen ride in the parade. To decide who wins the title of queen, every state is listed on a wheel, and the wheel is spun, “like the Wheel of Fortune,” Fisher said. “The queen gets to go to Japan.”

Sharon Cox, Fisher’s mother, wasn’t surprised her daughter was recognized for the honor.

“I’m very proud. Melissa is one of those people who has over 1,300 Facebook friends because she never meets any enemy,” Cox said. “She’s a good representation of a young woman professional. Representing Alabama is an honor for her.”

By NEAL WAGNER / City Editor Walking down the miles of hallways in Shelby Baptist Medical Center’s many facilities, it... read more