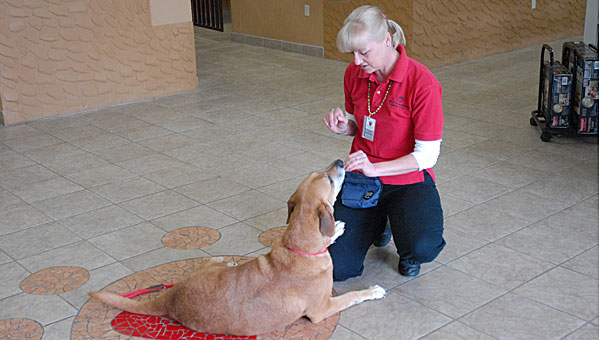 When Helena resident Lynn Rachkiss saw a “help wanted” sign requesting a dog trainer at a large pet supply store in Maryland, she immediately knew she had found the perfect way to practice her love of animals.

A few years and three cities later, Rachkiss’ career as a professional dog trainer has led her to Alabama.

“I was in a PetSmart in Waldorf, Maryland, and they had a sign up that said they were looking for trainers,” Rachkiss said. “I’ve always volunteered at shelters, so I guess I have always had a love for animals.”

After training to become a pet trainer at the Maryland pet store, Rachkiss, a retired member of the U.S. Navy, and her husband, who is also in the military and currently stationed in Gulfport, Miss., moved to Miami.

While in South Florida, Rachkiss began her own house-call pet training business, and opened an all-natural pet food store similar to Alabama Pet Foods in Pelham.

From Miami, Rachkiss and her husband moved to Gulfport, where she later learned of an opening at the Greater Birmingham Humane Society in Homewood. Although Rachkiss had been involved in pet training for a few years, she said she saw an opportunity to have a bigger impact on the pet community at a humane society.

Because animals with aggressive tendencies typically have difficulty being adopted, training can help animals in humane societies find a home.

“Here, I feel like I have a chance to make a difference,” Rachkiss said. “I’m helping to train dogs that may not otherwise get adopted.”

Through her programs, Rachkiss focuses on positive reinforcement, and does not use punitive methods to teach the animals.

Rachkiss said it is rewarding to see an animal’s progression from week to week as they go through the training. Through her training classes, Rachkiss covers everything from standard commands, such as sitting and staying, to the “canine good citizen test,” which was developed by the American Kennel Club.

“The canine good citizen test is basically when a dog is evaluated on 10 different tests. The dog has to sit on command, not get aggressive when they see another dog, things like that,” Rachkiss said. “It’s basic skills a dog needs to behave when they are in a group of people.

“A lot of homeowners and condo associations are requiring that dogs pass that test before they are allowed,” she added.

Because Rachkiss regularly helps dogs and their owners live more comfortable lives together, she said she plans to continue her profession for years to come.

“I feel like I am giving dogs a chance to stay in homes and be adopted,” she said. “Puppies don’t come trained, so find it to be a very rewarding job.”