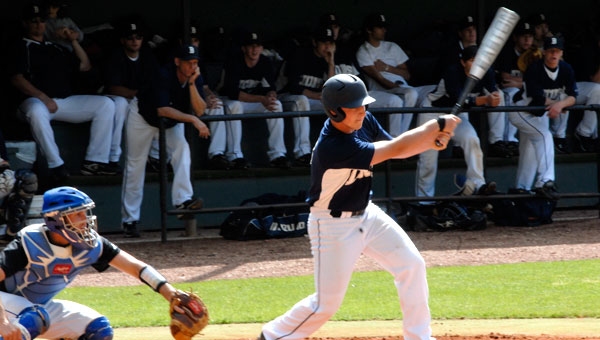 NORTH SHELBY — Briarwood Christian School sophomore Daniel Robert came up to the plate for a seemingly meaningless at bat in the bottom of the sixth inning against rival Chelsea in the Lions’ final Alabama High School Athletic Association Class 5A, Area 7 game April 16.

After helping Briarwood Christian cruise toward the Class 5A, Area 7 championship with four hits, including a solo homer, in the first five innings, Robert’s final at bat mattered to few in attendance.

It mattered to Robert, who drove in a run as he lined a single to right field to push the Lions’ lead to 11-2. Junior Kelvin McKelvey followed with an RBI single and Briarwood Christian claimed the Class 5A, Area 7 title in walk-off fashion due to the mercy rule with a 12-2 win over the Hornets.

Robert’s single in his final at bat capped a perfect 5-for-5 performance at the plate. Robert drove in two runs and scored three runs in the victory.

“It’s kind of what I expected,” Robert said. “I expect perfection.”

Briarwood Christian will have the same goal entering the Class 5A playoffs. With a lineup complete with valuable postseason experience, the Lions hope to return to the Class 5A championship game for the second time in three seasons.

Briarwood Christian coach Steve Renfroe said pitching will be key to the Lions’ postseason success. The Lions will host Pleasant Grove in a best-of-three series in the opening round of the Class 5A playoffs April 22-23.

Junior Will Brown earned the win on the mound against Chelsea after giving up two unearned runs on two hits with seven strikeouts and a walk.

“Our pitching has really been our strength,” Renfroe said. “Will was outstanding.”

The Lions scored two runs in the bottom of the first inning to jump out to an early 2-0 lead.

Robert singled to left field before advancing to second base on a single to center field by Logan Crook. Robert scored on a fielding error, which allowed Crook to reach second base. Crook advanced to third base on a passed ball before scoring on an RBI single by Harrison Foster.

Chelsea responded with two runs in the top of the second inning to tie the game at 2-2.

Tres Gregg reached on a throwing error, moved to second base on groundout by Austin Dean and advanced to third base on a balk by Brown. Gregg and Davis Shoemaker, who reached on a walk, scored on a two-run single by Alex Dean.

Briarwood Christian tacked on three runs in the bottom of the third inning to push its lead to 5-2.

The Lions added two runs in the bottom of the fourth inning to push their lead to 7-2.

Robert led off the inning with a solo home run that curved just inside the right-field foul pole. Craft, who had a triple off the center-field wall, scored on an RBI single by Hale.

Briarwood Christian pushed its lead to 9-2 with two runs in the bottom of the fifth inning.

The Lions closed out the game with three runs in the bottom of the sixth inning.

Jake Campbell started on the mound for Chelsea and took the loss after giving up seven runs on nine hits with six strikeouts and a walk in 3 2/3 innings.

Chelsea coach Michael Stallings said the Hornets made a lot of progress in his second season at the helm, mostly due to veteran leadership from a seven-member senior class.

“We had some good senior leadership,” Stallings said. “The chemistry has been a lot better.”