From the seed to the dining hall 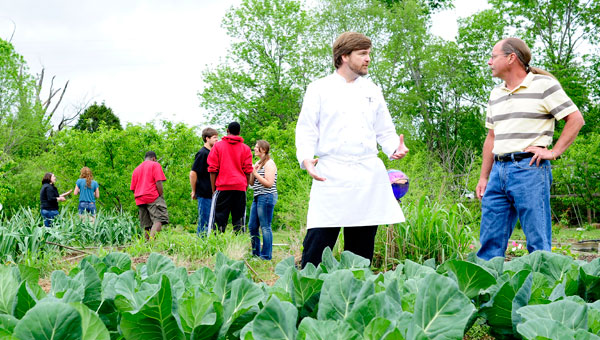 INDIAN SPRINGS — In the back of the lush, green Indian Springs School campus is a garden with a decidedly pop-culture feel.

The students have truly made the garden, named the Fertile Minds Learning Garden, their own, said Indian Springs School chef Wendy Bowman.

“It’s a learning garden. They plant their own stuff in the beds and take care of it,” she said. “The usable stuff comes to the dining hall, where we cook it and eat it.”

Pollard, who is also the director of the Fertile Minds Learning Garden program, said the students participate in a cooking lab once crops are ready to be picked.

“We’ll take it in and do stir-fries and cook it,” he said, mimicking the students’ enthusiasm. “They eat everything up. It’s all gone.”

Vizzina said he tries to help the students understand how to prepare vegetables, not just how to grow them.

“It’s water-soluble vitamins, so if you overcook them, you lose all the vitamins,” he said.

Vizzina said his major goal is getting to students while they’re young and haven’t developed bad habits yet.

“I think we’ve got to attack the whole eating healthy issue while they’re young,” he said. “It’s another tool to fight childhood obesity and high school diabetes.”

Preparing food also gives students a chance to learn to sit at the table and enjoy food with loved ones, he said.

Campus Dining Inc. manages food service accounts at ISS, Samford University and Mississippi College, among other locations. Vizzina has been nominated for an International Foodservice Manufacturers Association Silver Plate Award in the Colleges and Universities category, known as “the Oscars of food service.”

Vizzina will attend the awards ceremony in Chicago in May.

Shakespeare with a southern twang