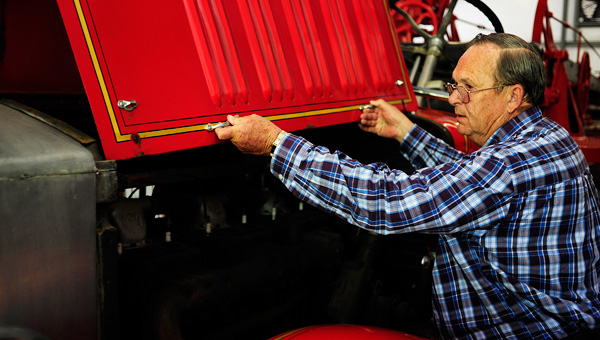 J.D. King slides the cover over the engine of one of the restored trucks in a barn on his Saginaw property. (Reporter Photo/Jon Goering)

As J.D. King flipped a light switch in the basement of his Saginaw home, the bright red hue of dozens of glass display cases packed with thousands of firefighting memorabilia illuminated the room.

Save for walking space around the display cases, every inch of the room, from floor to ceiling, was packed with everything from firefighter-themed Mickey Mouse toys to fire engine-shaped whiskey decanters.

“As you can see, we’ve run out of room,” King said with a laugh. “We filled all the display cases, so we started putting stuff on top of them. Now, we’re out of room again.”

King, who was a Birmingham firefighter from 1963-1989, has been collecting every type of firefighting memorabilia available for more than 40 years.

Today, his house and nearby garage serves as a journey through firefighting history. With items as rare as a 1700s French parade helmet and as large as functioning fire trucks of nearly every variety, King and his wife, Bobbie, said they are unsure how much money they have tied up in the hobby. 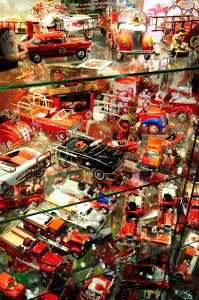 Memorabilia sits in cases in the residence of J.D. King. (Reporter Photo/Jon Goering)

Recently, the Kings signed over their entire collection to Shelby County to use in its upcoming fire museum in Calera.

“People have asked me how much all this stuff is worth. I honestly don’t know,” said J.D. King. “The county is going to have everything appraised before they build the museum.

“Some of the items I paid too much for, and some of them I got pretty cheap and now they are worth something,” J.D. King added.

Like many collectors, King said he did not set out to gather such a vast collection of firefighting memorabilia. The first piece of his collection came in the form of a small tin firetruck toy gifted to him by his mother in 1944.

Through the next few decades, King gathered a few items as he was able, but his collection did not begin growing rapidly until he retired from the Birmingham Fire Department.

“For a while, I couldn’t really afford to collect anything. I would get something big maybe for Christmas or a birthday present,” J.D. King said, noting one of his favorite pieces is an Armani Mickey Mouse firefighting figurine.

Because the Kings travel frequently, they are always on the lookout for new pieces to add to their collection.

“If it is related to the fire department, we get it,” said Bobbie King, who owns several pieces of the collection, including a fire truck. “What we don’t have, we just can’t afford to buy.”

The most valuable segment of the Kings’ collection rests in a large hangar-like garage next to their house. Inside, 12 fire trucks, ranging from an 1890 chemical hand cart to a 1963 Mack, are arranged like puzzle pieces to ensure there is enough room for all of them.

Because the Kings have dedicated countless hours and at least hundreds of thousands of dollars to amassing the collection, the decision to donate everything to the county was not quick, J.D. King said.

“I’ve got too much stuff, and I’m getting too old to maintain it. I could leave it to my kids, but it would be a burden on them because it takes so much to maintain everything,” he said. “I figure I’ve got enough to retire and still leave my kids something.

“A lot of people ask me ‘What are you getting out of this? What’s your angle?’ Just the satisfaction of knowing it will be preserved,” he added. “This is a small token for me to give back to the community what I was able to acquire while I was on this earth.”