Students run Pelham for a day 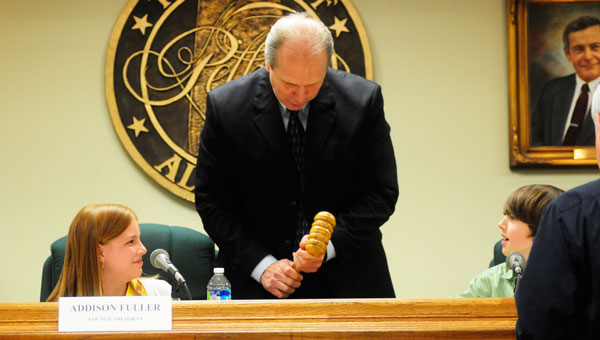 Members of the Pelham City Council got a little help from the city’s future leaders April 18, as elected fifth-grade representatives from Valley Intermediate School ran the meeting during Pelham’s Youth Government Day.

The council meeting capped off the daylong civic involvement project, during which students at VIS toured the city’s facilities and learned more about Pelham’s leaders and department heads. 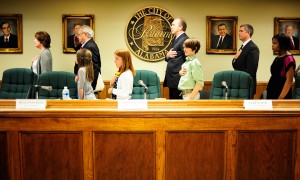 Pelham City Council members along with their youth counterparts perform the Pledge of Allegiance before the start of the Youth Government Day city council meeting on April 18. (Reporter Photo/Jon Goering)

Students at the school previously held an election to determine which fifth-graders would serve in leadership roles during Youth Government Day. Those elected spent the morning shadowing their real-world counterparts and getting an in-depth look at what it takes to run the city.

The elected students then wrote about their experiences and shared them during the council meeting.

Darren Ledbetter, who was elected mayor, said he enjoyed his time with Pelham Mayor Don Murphy.

“I learned that he is responsible for over 300 employees. He makes sure each city leader is doing their job correctly,” Ledbetter said. “I loved everything about my day with him.” 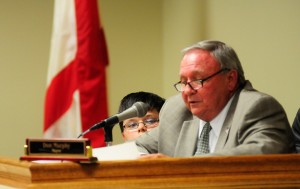 The student council also heard from their peers who were elected to serve as the city’s department heads for the day.

“It was cool how they run stuff,” Pierce said. “The best human resources director in America is (Pelham HR Director) Jerry Nolen.”

Jan Plascencia, who served as the city’s director of revenue for the day, encouraged Pelham citizens to make their purchases at home.

“This will keep the tax money in our city,” Plascencia said. “Tax money provides services all citizens benefit from.”

“Particularly, we noticed I-65 over 119 has widened a great deal,” Wallace said.

Selena Zapata served as the building official for the day, and said she learned the importance of zoning regulations.

“We enforce all sign and zoning ordinances,” Zapata said. “As new businesses come into the city, we enforce the overlay requirements.”

Charlie McLean was elected to serve as the director of public works, and shadowed his Pelham counterpart, Eddy Jowers.

“I learned a lot. Maybe too much,” McLean said, drawing laughter from those in the audience. “We earn one vacation day a month, which isn’t a lot.”

Lisbeth Duarte, the city’s police chief for the day, said she got a close look at the Pelham Police Department and jail.

“I learned that no prisoners have escaped from our new jail, which is good,” Duarte said. “I would like to thank (Pelham Police Chief) Mr. (Tommy) Thomas. He’s a very nice guy and funny.”

“Last year, they received 3,000 phone calls, and 80 percent of them were medical,” Hawkins said. “The firefighters work 24-hour shifts, but after that they get two days off.”

Jamila Wilson was elected to serve as the librarian, and said she would one day like to help out more at the library.

“I enjoyed being surrounded by nice and helpful people,” Wilson said. “I enjoyed my time at the library, and would jump at the chance to do it again.”

Justin Allison, the student representative for the parks and recreation director, said he was eyeing Pelham Parks and Recreation Director Billy Crandall’s job. 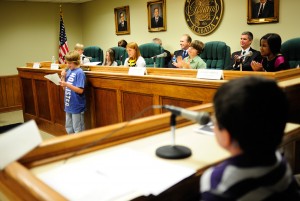 Director of Parks and Recreation for the day Justin Allison gets an applause from his fellow student council members during his Youth Government Day speech on April 18. (Reporter Photo/Jon Goering)

“I learned a lot of things today with Mr. Billy. I learned the clay for the tennis courts comes from West Virginia,” Allison said. “When I grow up, I want to be the Pelham parks and recreation director.”

Elected Director of Ballantrae Golf Club Hannah Pritchett said she could speak at-length about what she learned during the day.

“If I told you everything I learned, it would take all night,” Pritchett said. “One of my favorite things is when they need water, they use their walkie-talkies to turn on the sprinkler heads.”

Caroline Doughty was elected to lead the Greater Shelby County Chamber of Commerce for a day, and said she learned about the organization’s many events.

By AMY JONES / Associate Editor Both Shelby County and the state of Alabama saw drops in the unemployment rate... read more