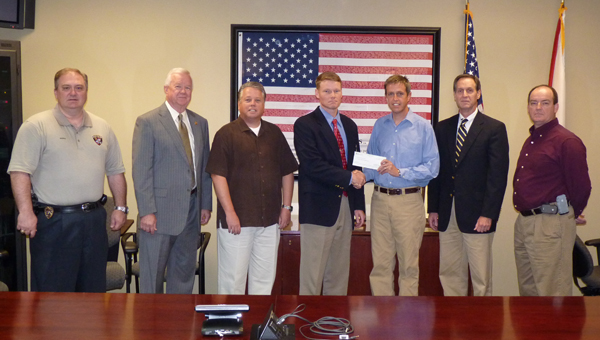 Two brothers recently made a sizeable contribution to the Shelby County Sheriff’s Office.

The check was presented on behalf of the Carpenter’s company, which is headquartered in Bristol, Va., and has locations in Cookeville, Tenn., and Atlanta.

“We felt obligated to contribute since it’s our home county,” Jason Carpenter said.

Jason Carpenter said they’ve noticed that law enforcement agencies are the “first ones to take a hit” when county commissions or city councils are making budget cuts.

The sheriff’s office has designated the $50,000 for the Shelby County Drug Enforcement Task Force.

Task force commander Lt. Chris George said funding for salaries could be an issue in the next fiscal year. He said the $50,000 would help cover some equipment costs.

“I can’t say thank you enough ways,” Sheriff Chris Curry said of the donation. “This is just an incredible act for them to put their money where their mouth is and where, in my opinion, the public’s mouth is.

“Everybody believes in what we’re trying to do,” Curry added, “and these people came forward and clearly indicated that that’s the expectation – that that service really be delivered.”

George and Curry both said a portion of the money would be used specifically to combat guns.

George said dealers are frequently armed during drug transactions, especially for certain types of drugs, like cocaine or heroin.

“We’re going to take a portion of the money and focus it on gun-related violations as we encounter them in the course of the business of fighting the drug trafficking,” Curry said.