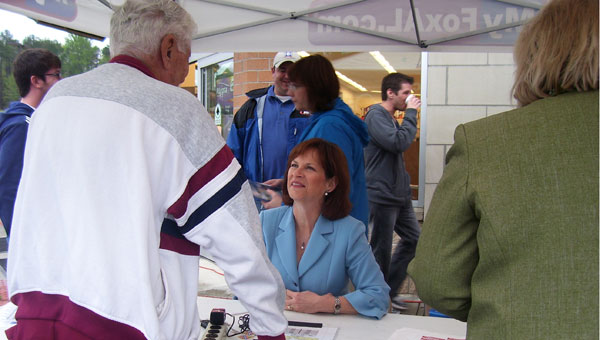 “People are not in danger of being carried off to Oz in a tornado,” WBRC Fox6 Meteorologist Mickey Ferguson said. “And they’re not usually injured when their house falls in, but by stuff flying around.”

Ferguson was one of several Fox6 personnel greeting local residents and programming weather radios for them at the Chelsea Walgreens drugstore on a recent Wednesday.

According to Teresa Hawkins, Fox6 event coordinator, their people programmed the 359 radios sold by Walgreens that day, plus tons of other radios people brought in.

“We’ve been able to get a lot of people excited about using weather radios,” she said.

Ferguson said that when the radio alarm sounds, people should check the screen to see if the alert is for a storm watch, storm warning, chemical spill, etc.

The radio will give directions about what to do. If the alert is a storm warning, people should get to their pre-designated place of safety, he said.

If they have a basement, they should go there and try to get under the stairwell.

“Put as many walls between you and the outside as you can,” Ferguson said, “and be sure to cover your head with a pillow or something to protect it from flying debris. Children can wear their bicycle helmets. They would think this is fun.”

John DeBlock, warning co-ordination meteorologist for the National Weather Service said, “I can’t tell you how much we appreciate such great media promotion as Fox6 … You all provide more promotion for weather radios than we could ever begin to think of.”

“What’s exciting to me is meeting the people and being able to help them,” Hawkins said, adding that the reporters are really excited about doing this too. They enjoy it as much as the local people do.

Three years ago, Greg and Wendy Davis walked away from a secure lifestyle in north Alabama to begin a church... read more