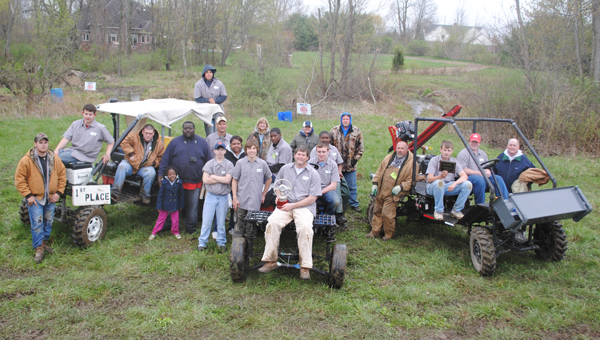 The 11th annual competition, sponsored by the Institute for Affordable Transportation, was held April 16 in Indianapolis. It sought designs of affordable Basic Utility Vehicles that could be used in impoverished areas of the world.

Calera won the competition by scoring 88.02 of a possible 98 points. Purdue was second with 77.2 points.

“Three years in a row, this is something to really be proud of,” Calera Principal Richard Bishop said. “Now it’s become a tradition to go up there and continue to dominate this type of competition.”

Five of the registered 14 college engineering teams failed to construct their BUV in the allotted 4.5 hours.

“The most amazing thing is a lot of schools brought their vehicle partially put together,” Bishop said. “We brought ours in a crate.”

It was the fifth consecutive year that Copes had a winning team in the competition. He previously taught at Chelsea Middle School.

“Shelby County has demonstrated for five straight years that their students are competitive and are in line to become future engineers,” Copes said. “This speaks highly of the potential future labor force.”

By KATIE HURST/ Lifestyles Editor Children aren’t the only ones learning new skills through the Shelby County Board of Education.... read more