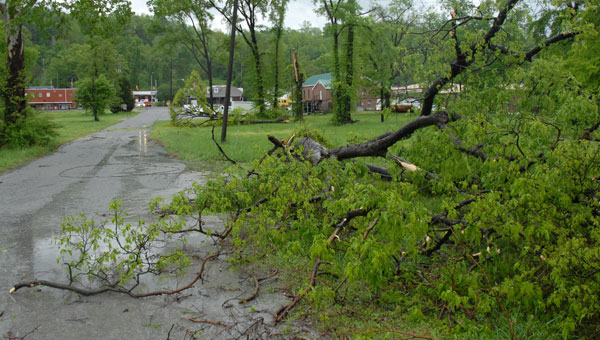 A large tree severed a small power line behind the Alabaster City Hall Annex after it was blown down by a storm April 15. Police dispatchers reported no major damage as a result of the storm, which placed Alabaster under a tornado warning for nearly an hour. (Reporter Photo/Neal Wagner)

The first tornado touched down in Alabaster at about 5 p.m. behind Evangel Church off Thompson Road. The tornado traveled northeast 1.36 miles before lifting near U.S. 31 behind Alabaster City Hall.

The National Weather Service categorized the Alabaster twister as a category 0 storm on the Enhanced Fujita scale, and estimated winds in the tornado reached about 70 miles per hour. The tornado reached 50 yards wide at its widest point.

“This tornado was witnessed by several residents, including police officers,” read a NWS release.

EF-0 tornadoes typically do not cause much structural damage, but can easily snap and occasionally uproot weaker trees, said Angel Montanez, a meteorologist at the NWS office in Calera.

“An EF-0 can snap some weaker or smaller trees. You may have some minimal roof damage,” Montanez said. “Still, 70-mile-per-hour winds are pretty good. They come in sudden gusts.”

Because the tornado’s path crossed several densely populated areas of the city, several homes were damaged by falling trees. Much of the damage occurred along Eighth Street Southwest and Sixth Street Southwest.

Immediately following the storm, which began hitting the city shortly before 5 p.m., police were forced to direct traffic around flooding on U.S. 31 near Shelby Baptist Medical Center.

The second, and strongest, Shelby County tornado touched down in Wilsonville at about 5:45 p.m., and was categorized as an EF-1 twister.

The tornado touched down about 2.5 miles northwest of Wilsonville on Largin Road. The storm traveled northeast about 4.25 miles before lifting north of Alabama 25 near the Lay Lake inlet.

Winds in the Wilsonville tornado peaked between 85-90 miles per hour, and the storm was 100 yards wide at its widest point.

“When you have an EF-1 storm, you usually see a lot more uprooted trees, and you see more significant tree damage,” Montanez said. “Any open building, like a barn or a carport, can be damaged or blown away.”

Several trees were snapped off or uprooted near the tornado’s touchdown point, but the most significant damage happened near Shelby County 441. There, one home suffered roof damage and a horse trailer was thrown at least 100 yards.

In Pelham, police were forced to direct traffic around a large tree blocking half of Shelby County 52 near the Summer Classics furniture company. Firefighters and police officers also blocked off a portion of King Valley Road due to a down utility line.