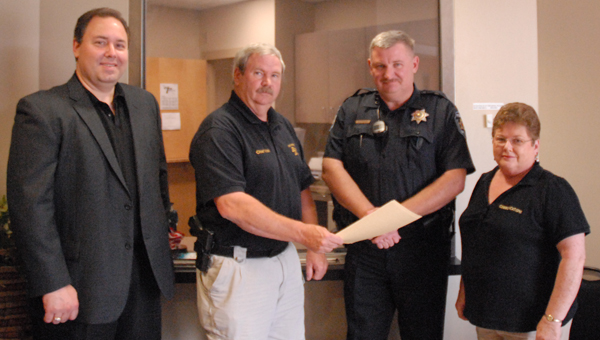 COLUMBIANA – Three city employees were honored April 21 for their quick responses last week to a civil dispute that could have turned deadly.

Lowe said the commendations were needed after an ongoing civil dispute between two men, neither of them city residents, somehow ended up in the parking lot of police headquarters, located at the back of City Hall at 107 Mildred Street.

Shortly before 9 a.m. on April 14, Walter Perkins and Ray Traywick drove separate vehicles to police headquarters. They scuffled briefly in the parking lot before Perkins shot once at Traywick with a 9mm gun.

Vick was sitting in his office when he heard the shot. Stough called for backup as Vick went outside. By the time he reached the parking lot, Perkins and Traywick had entered the building.

By the time Alexander responded from Main Street within a minute, Perkins and Traywick were exiting the building for the parking lot.

Vick said Perkins never pointed his gun at him or Alexander, but said Perkins did have a gun in his hand as the officers, guns drawn, ordered him to drop it and get on the ground.

Perkins, who had another small caliber handgun in his back pocket, complied.

Traywick was not struck by the bullet but was admitted to the hospital for two days after complaining of chest pains.

“The actions that were demonstrated that day reflected the high level of professionalism and excellence that the Columbiana Police Department has under Chief Vick,” Lowe said.

Vick deflected the praise to Alexander and Stough.

“The bottom line of why it turned out the way it did was because of the experience and judgment of Officer Alexander and the quick response of Dispatcher Stough.”

Alexander has been a police officer for 24 years, the last four with Columbiana. Stough has been a dispatcher for 19 years, all with the city.