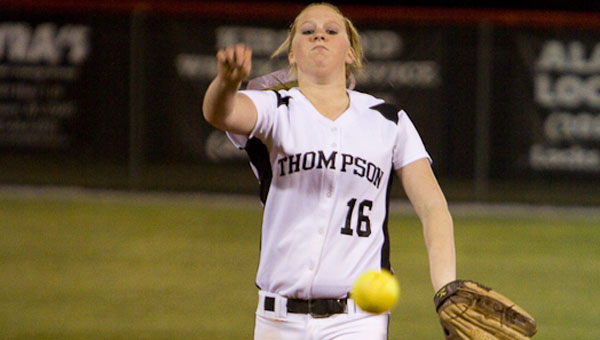 Thompson High School pitcher Taylor Powell and the Warriors will face Hoover in a battle for the Class 6A, Area 10 regular season championship April 26. (File)

The Panthers jumped out to an early four-run lead in the first inning, but the Warriors didn’t let their opportunity to win an area title slip away by scoring seven unanswered runs to post an 8-4 win and keep their championship dreams alive.

Thompson (26-12 overall, 3-2 in Class 6A, Area 10) will meet Hoover in its final Class 6A, Area 10 contest April 26 with the regular season area title and a chance to host the area tournament riding on the outcome.

“I know Pelham is a really good team,” Parker said. “I’m just glad we didn’t quit. I’m proud of our girls for battling back.”

Marly Terrell led Thompson at the plate as she finished 2-for-4 with two doubles. Terrell drove in two runs and scored one run in the victory. Rachel Rigney started in the circle for Thompson and earned the win after giving up two earned runs on eight hits with six strikeouts and three walks in a complete game.

Erin Whitman and Mary Morgan Dramer led Pelham (19-11 overall, 2-3 in Class 6A, Area 10) with two hits each in the defeat. Jennifer Davis started on the mound for Pelham and left the game with a no-decision after giving up two earned runs on three hits with three strikeouts in five innings.

Emily Spain took the loss after giving up three unearned runs on four hits in 1 2/3 innings in relief. Becky Fox recorded the final out on a groundout.

Pelham jumped out to an early 4-0 lead with four runs in the bottom of the first inning.

Dramer led off the game with a walk before stealing second base. Dramer moved to third base on a fielder’s choice by Kristian Foster and scored on a passed ball.

Heather McGuirk and Whitman reached safely with back-to-back singles before scoring on a three-run blast over the center-field wall by Caitlyn Sapp.

Thompson cut the lead to 4-1 with one run in the top of the second inning. Rachel Rigney led off the inning with a solo shot over the left-field wall.

The Warriors tied the game at 4-4 with three runs in the top of the sixth inning after racking up four consecutive hits and benefitting from a Pelham error.

Rebecca Victory led off the inning with a double and scored on a single by Savannah Gossett. Sarah Beth Watkins and Marly Terrell, who also singled in the inning, scored on a Pelham error to tie the game.

The Warriors took the lead for good with four runs in the top of the seventh inning.

Terrell and Rigney plated a run each with RBI singles and two other Thompson runners scored on Pelham’s second error in the game.