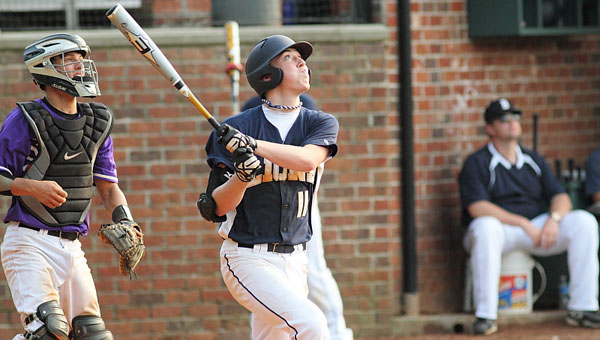 Briarwood Christian School sophomore Daniel Robert watches his ball fly out of the park in the Lions' 10-1 win over Pleasant Grove in the first game of the Alabama High School Athletic Association Class 5A playoffs April 22. (Contributed/Jimmy Mitchell)

NORTH SHELBY — Briarwood Christian School baseball coach Steve Renfroe had only a few words to sum up the Lions’ two playoff games against Pleasant Grove in the opening round of the Alabama High School Athletic Association Class 5A playoffs April 22.

Briarwood Christian defeated Pleasant Grove 10-1 in the opener before its offense stalled and the Lions saw their foes race out to a 7-0 lead in the second game. The Lions broke up a no-hitter in the sixth inning and scored seven runs in the frame to tie the game before the Spartans clinched a split in the best-of-three series with an 8-7 win in the bottom of the seventh inning following a walk-off hit.

“You’ve just got to tip your hat,” Renfroe said. “They made the plays to win.”

Briarwood Christian (16-9) will host Pleasant Grove in the deciding third game of the series April 23 at 2 p.m.

The Lions took the opener easily after racking up 12 hits.

Ben Craft, who drove in one run and scored two runs, finished 3-for-3 with two doubles. Harrison Foster went 2-for-3 at the plate and drove in two runs. Carter Tyra finished 2-for-2 and scored one run.

Logan Crook earned the win on the mound after giving up one earned run on six hits with six strikeouts and a walk.

Pleasant Grove, with help from seven Briarwood errors in the nightcap, jumped out to a 7-0 lead in the second game before the Lions’ bats came alive in the bottom of the sixth inning. Briarwood Christian scored seven runs on seven hits in the inning to tie the game.

Matthew Furuto and Robert opened the inning with back-to-back singles before scoring on a three-run homer by Crook. Hooper doubled to left field and scored on an RBI single by Pearson. Pearson, Tyra and Dan Thomas each scored on Pleasant Grove errors in the inning to tie the game at 7-7. Pleasant Grove plated the game-winning run in the bottom of the seventh inning.

Relief pitcher Cameron Adams took the loss after giving up only one run on three hits in the final two innings.