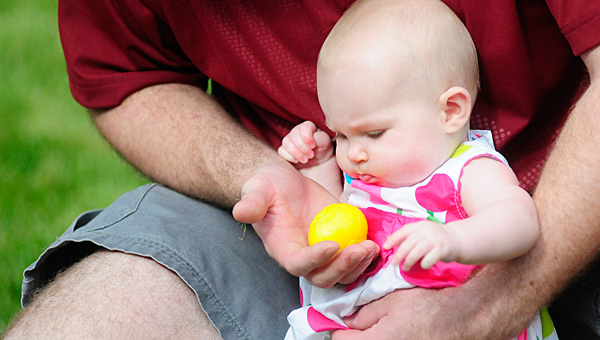 As air horns sounded at Alabaster’s Veterans Park early April 23, hundreds of kids of all ages sprinted onto five fields littered with a sea of bright plastic Easter eggs.

The kids laughed and smiled as they sprinted to the middle of the field, gathered as many eggs as they could carry and returned them to their baskets waiting on the edge of the fields. 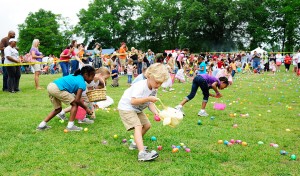 Parents look on as kids gather Easter eggs during the hunt in Veteran's Park in Alabaster on April 23. (Reporter Photo/Jon Goering)

“I got tired,” said a winded Camryn Bailey as she walked off the first-through-third-grade field with her father, Chris. “Running was my favorite part.

“I got a ring, some candy and some bubble gum,” Camryn added as she sorted through her Easter basket.

When asked if she expected a visit from the Easter bunny on April 24, Camryn shot her father a puzzled look.

“Have you been a good girl?” Chris Bailey asked. “He’s going to come see you, I’m sure he is.”

The egg hunt was part of Alabaster’s Easter celebration, which was sponsored by Liberty Baptist Church, Alabaster First Baptist, Kingwood Church, Westwood Baptist, the Alabaster Parks and Recreation Department, the Alabaster police and fire departments and the mayor and City Council.

After the egg hunt, excited children rushed to show their parents what they collected.

“They had a golden egg out there, but I wasn’t fast enough to get it,” Carson Koger, who walked to Veterans Park from a nearby neighborhood with his family, said shortly after he exited the first-through-third-grade field.

“I’ve got 12 eggs in that basket,” Carson added, noting event organizers asked each child to only collect 12 eggs from the field to ensure each child collected an equal amount.”

“We have fun with candy and Easter eggs every year, but the real meaning behind Easter isn’t about eggs or candy,” Sims said. “On Easter Sunday 2,000 years ago, Jesus bled and died for us.

“And three days after he bled and died for us, he rose again,” Sims added. “Jesus cares for you more than you know.”

FROM STAFF REPORTS The Coosa Valley Academy softball team ended its season April 22 with a 19-3 win over South... read more