Oak Mountain headed to second round 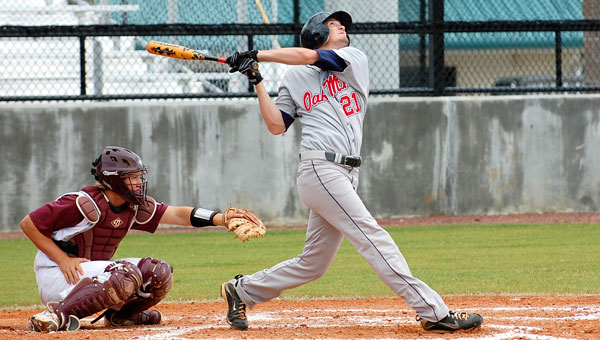 Oak Mountain High School junior David Dahl homered in the Eagles' 11-7 win over Tuscaloosa County in the deciding third game in the first round of the Alabama High School Athletic Association Class 6A playoffs April 23. (File)

The Oak Mountain High School baseball team advanced to the second round of the Alabama High School Athletic Association Class 6A playoffs following a 11-7 win over Tuscaloosa County in the deciding third game of a best-of-three series in the opening round April 23.

Oak Mountain scored seven runs in the first two innings on its way to a victory in the deciding third game.

David Dahl led the Eagles as he finished 2-for-3 at the plate with a home run. Dahl drove in three runs and scored three runs in the victory.

Jake Hubbard also homered in the win. Hubbard, who drove in three runs and scored one run, went 2-for-5 at the plate. Barrett Gossett finished 1-for-2 at the plate.

Oak Mountain used four pitchers in the final game of the series.

Justin Hoyt earned the win on the mound after giving up two unearned runs on three hits with a strikeout and two walks in three innings.

Nick Bietighofer allowed one earned run on four hits with a strikeout and a walk in two innings. Conner Pinegar struck out one batter and issued one walk in one inning. Josh Floyd gave up four earned runs on five hits with two strikeouts and two walks in one inning.

Briarwood Christian on to second round

Briarwood Christian School senior Logan Crook finished 2-for-3 at the plate with a double in the Lions' 11-4 win over... read more