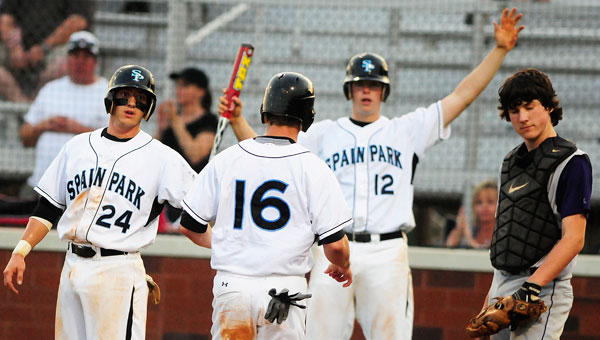 By DAN COOK / For the Reporter

The Spain Park High School baseball team swept a doubleheader with Minor in the first round of the Alabama High School Athletic Association Class 6A playoffs April 22.

Spain Park will travel to Vestavia Hills in the second round of the AHSAA Class 6A playoffs April 29-30.

With a 15-0 lead at the end of the third inning in the opener, Spain Park substituted in backups at every position on the field.

Alex Close led Spain Park at the plate as he finished 3-for-4 with a double and drove in a run.

Close (5-2) earned the win on the mound after giving up two earned runs on three hits with nine strikeouts in a five-inning complete game.

The Jaguars racked up 13 hits in the nightcap.

Veteto led Spain Park at the plate as he finished 3-for-3 with a double. Veteto drove in three runs and scored two runs in the victory.

Mikey White finished 2-for-3 with a triple and a double and drove in four runs. Nathan Brock, who went 2-for-3 at the plate, drove in two runs and scored three runs.

Ellis earned the win on the mound after giving up one run on five hits with a walk in 3 2/3 innings. Colton Freeman allowed two earned runs on one hit with three strikeouts and a walk in 1 1/3 inning.