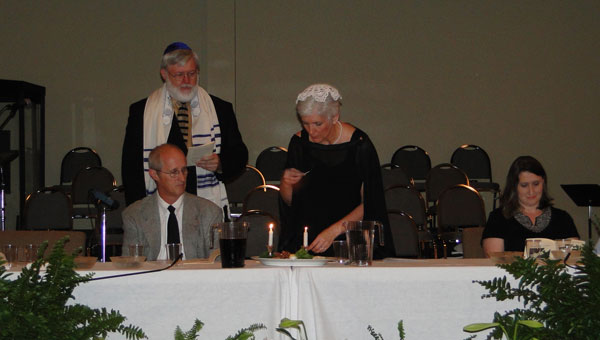 “Christ our Passover also has been sacrificed,” reads 1 Corinthians 5:7.

It was the Passover sacrifice that delivered Israel from Egypt’s bondage, and it is the cross, of which the Passover was a prophetic type, which delivers us from sin’s bondage.

Moses instructed the Israelites to take a lamb into their households, and for four days they carefully examined it for flaws. This was similar to the examination and scrutiny Jesus, the true Passover Lamb, received when he entered Jerusalem four days before his crucifixion.

The Israelites observed the ritual Passover, examining the lamb for blemishes, while the Pharisees, Sadducees and scribes searched Jesus for disqualifying flaws. As knives were put to the throats of the sacrificial lambs on the Jewish Day of Preparation, Jesus was sacrificed on a cross.

Calera Baptist Church observed a Passover meal, termed Seder, which recounts the story of the liberation of the Israelites from slavery in ancient Egypt. The meal is symbolic of the sufferings of the Jews and 10 plagues on Egypt.

Elements of the meal were presented individually and their significance given by Mark Ledbetter of the Congregation of Beth Hallel, a Messianic Jewish synagogue in Birmingham.

Asked why Christians should observe the meal, Ledbetter answered, “The Passover Seder provides context for the Last Supper. What Jesus did by addressing the matzah, as his body, and the wine, as his blood, was add to the Seder, not replace it.”

A Seder tray containing symbolic Passover foods included: morar — grated horseradish symbolic of the bitterness of slavery; z’roah — roasted shank bone symbolizing the 10th plague, death of the firstborn; kharoset — apple, nut, honey mixture symbolic of the mortar and bricks the enslaved Jews used to build Pharaoh’s cities; chazeret — lettuce representing a bitter herb eaten with the Paschal lamb; karpas — parsley dipped in salt water to represent tears; beitzah — a roasted egg representing the festival sacrifice; matzah — unleavened bread commemorates the Jews left in such haste, there was no time for the bread to rise. It also represents the Messiah as he was pierced, bruised and striped.

The matzah, broken into three pieces, represents unity: Father, Son and Holy Spirit. The middle piece is broken in half. Half is placed in a cloth and hidden. This piece is called Afikomen, translated “coming one.” At the end of the meal, children found it and ransomed it for a special prize.

Information about Beth Hallel is available at ShalomBirmingham.com.

The one sure hope

This week’s column was co-written with Pastor Jeff Fortenberry of Bethel Baptist Church in Columbiana. Fortenberry and his family have... read more