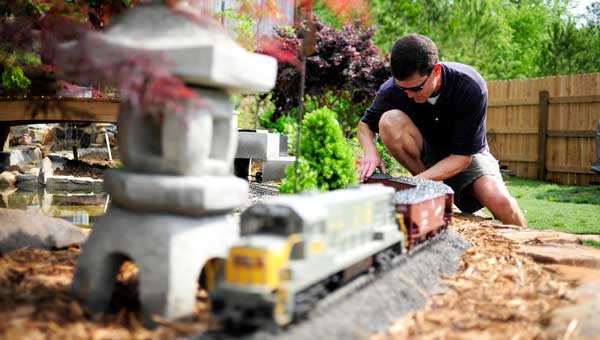 HELENA – The shrill cry of a train whistle and the soft chugging of train cars along the track can often be heard in an unlikely spot in Helena… in a neighborhood backyard.

For Helena resident Ben Clements, “I’ve Been Working on the Railroad” is an almost daily theme song as he works to combine his passion for outdoor landscaping with his passion for model trains into a backyard garden railroad.

To most, a garden railroad would seem like just a model train set up to run in an outdoor garden, but to Clements, his railroad represents hours of entertainment, meticulous attention to detail and afternoons of hard labor on what is just the first phase of his project.

Currently, almost half of Clements’ backyard is dedicated to the train. With a raised hardscape of hand-placed rocks as the foundation, the train’s track winds through miniature tree-like shrubs and around a central Koi pond at the base of an outdoor entertainment and sitting area.

The first phase alone took Clements almost a year to build, he said, as most was done by trail and error. However, compared to his former situation of tinkering with model trains in a small attic space, moving to the backyard opened a whole new world for him, he said.

“You’ve heard the saying, ‘Boys never grow up, the size and price of their toys just get bigger.’ Well, this is an example of that,” Clements said. “I have a pretty big back yard to fill up with trains.”

Like many, Clements’ interest in model trains began at a young age. It was later in life when he discovered railroad gardens as a combination of his two hobbies, he said.

“When I was about 7 years old, my grandfather had an indoor railroad layout,” he said. “From there my interest just grew. I’ve always had an interest and passion for outdoor stuff and gardening, and this is kind of like putting my different hobbies together – the gardening, the hardscapes, caring for the fish in the pond and my love for model trains.”

Along his outdoor track, Helena residents might notice a few familiar landmarks as Clements hand crafts historical houses and buildings to go alongside his model L&N train.

“It’s kind of a down-sized version of the real thing,” he said. “One thing I really like about this is the history aspect of it. The L&N railroad was one of the big ones here in Helena in the 20th century; this train is a tribute to that.” 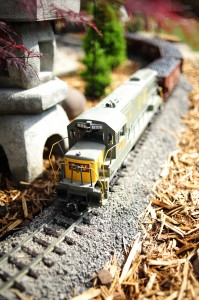 While friends, family and a handful of train-loving children have already enjoyed Clements’ hard work, he said there’s still more work to be done.

In phase two and three of the project, he said he hopes to build a mountain tunnel for the train to pass through into a coaling and timber section of the garden. Eventually, he’ll switch from electric to battery operated, and may even rig the train to deliver drinks to guests, he said.

“One thing I love about this hobby is it never really ends,” he said. “There’s not a beginning and end; it’s always changing. It’s rewarding because you can see your work and you’re able to share it with friends and family.”

For more on Clements’ backyard garden railroad and updates on his progress, visit his blog at HelenaGardenRailroadSociety.blogspot.com.