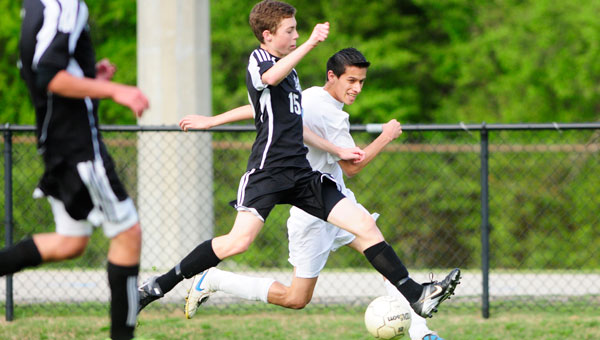 Christian Alvarenga (Right) is one of many players with Latin American backgrounds on the Calera High School boys' soccer team. (Reporter Photo/Jon Goering)

CALERA — A medley of chatter in English and Spanish rings out just a few feet away from the playing field at Ricky Cairns Stadium in Calera on a sunny spring evening.

“Come on, follow that,” said a Calera fan leaning up against the fence separating the field from the bleachers.

“Bueno, Christian,” shouted another fan just a few feet away.

The words mimic the scene on the field, where members of the Calera High School boys’ soccer team — with a mixture of American and Latino players — race up and down the field.

Calera coach Neal Gerhart estimates his team has players from “seven or eight countries” on his roster, with a majority of them from Latin America.

Coaching players who speak two different languages can be difficult at times, but it’s a welcome challenge for Gerhart.

“The whole language (barrier) is a nice thing,” Gerhart said. “It’s a great experience to work with guys from such diverse cultures.”

Alvarenga, who was born in Los Angeles after his parents immigrated from El Salvador, said the soccer team’s Latin American influence has helped him fit in at Calera.

“It’s a good experience, because I learn more about other places, other cultures,” said Alvarenga, who moved to Calera with his family when he was in the sixth grade. “I’ve learned to understand different people’s habits, their foods, how people live in all kinds of different places like Poland, Panama, Guatemala, El Salvador, Ukraine, Mexico, Puerto Rico, Africa.”

At the same time, Alvarenga said he and his teammates have had to learn how to work together with their different backgrounds.

“It’s also challenging, because people coming from other places may have different skills,” Alvarenga said. “This is something I had to get used to.  But it is also a good advantage. You can learn from others, learn to cooperate as a team.”

Petersen, who said he hopes to one day travel the world as a Navy Seal, said soccer brings he and his teammates together despite the differences in culture.

“(Soccer) is pretty important,” Petersen said, “because it’s in every country around the world.”

Petersen said he and his teammates who were born and raised in the United States pick up knowledge and skills from players with Latin American backgrounds, including brothers Christian and Irvin Alvarenga.

“They have skills that I don’t even know,” Petersen said. “They teach us new things, and they even teach the coaches new things.”

Senior Henoko Lubala, a native of Tanzania who is sitting out the season after suffering a severe knee injury during football season last fall, said the combination of several nationalities benefits everyone on the team both on and off the field.

“They’re teaching me some things I don’t know and I’m teaching them some things they don’t know,” said Lubala, who goes by the nickname “Mike,” which was given to him by his teammates.

Team unity can be a difficult thing to build, especially when a team has as many differences in nationality and personality as the Eagles have. That isn’t the case with this team, Gerhart said.

“They get along really well,” Gerhart said. “They’re very inclusive. They’re not exclusive at all. This is probably the easiest team that I’ve had to work with.”

Gerhart said soccer gives his Latin American players an outlet to display their athletic ability. Many develop a love for the game of soccer during their childhood in Latin America and aren’t interested in playing baseball, basketball or football, Gerhart said.

Soccer helps ease the transition into a new school and community, Gerhart said.

“I think that sometimes (Latin American players) get overlooked in school,” Gerhart said. “(The soccer field) is truly their place to shine.”

Gerhart said his Latin American players are also standouts off the field.

“The Latino kids are always among my best students in class,” Gerhart said. “They are always the most polite and respectful.”

They’ve earned the respect of their counterparts, Petersen said. He said every team member supports one another, regardless of nationality, on the playing field.

“Nobody messes with the team,” Petersen said. “We’re like brothers.”

Lubala, who counts Cristan as one of his best friends, said he’s been blessed to be surrounded by so many different cultures during his time at Calera.

“When (the cultures) come together,” Lubala said, “it’s a beautiful thing.”