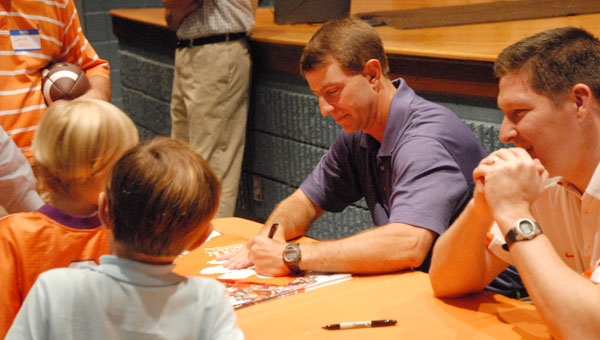 The usual Pelham High School colors of green and gold were replaced for the night with a sea of orange and purple April 26, as the head football coach of Clemson University made a return to his hometown.

Dabo Swinney, a Pelham native and current head coach of the Clemson Tigers, greeted dozens of Clemson fans and graduates in the PHS auditorium as he shared his thoughts on the Tigers’ past season, their upcoming season and on his memories of growing up in Pelham.

“I met a lot of interesting folks here tonight. I met someone from the (Clemson) class of 1955 all the way up to someone from the class of 2007,” Swinney said. “I got to see a lot of family while I was here, and I really enjoyed that.”

Swinney played on the PHS football team before walking on at the University of Alabama, where he played as a wide receiver during the Tide’s 1992 national championship team.

The Pelham stop was part of the “Prowl and Growl Clemson Tiger Tour,” and was the only Alabama stop planned in the tour’s 11-stop schedule. Clemson men’s basketball coach Brad Brownell joined Swinney during the event.

“It’s always great to pay honor to one of your own,” Murphy said, noting Swinney “never forgot where he came from.” “I’ve known Dabo for a long time, and he was always a good young man who never gave anyone any trouble.”

“Congratulations Dabo. We love you, we really do, and we are very proud of you,” said Hayes, who was wearing a bright orange Clemson polo shirt. “This is well-deserved.”

Swinney said he is attempting to build a stronger recruiting base in Alabama, and said he wants to build Clemson’s reputation in the state.

“We have signed one to four guys from this state each year since 2003, and we have had some guys who have really made a difference for us,” Swinney said. “They are tough, they don’t mind working and they love to play.”

Swinney said a new offensive system will help the Tigers handle a tough schedule next year, and said quarterback Taj Boyd will be a “perfect fit” for the system.

“We want to have one of the top defenses and the top offenses in the country,” Swinney said. “I think we will score 28 or more points per game. I think we are really going to have an exciting year next year.”