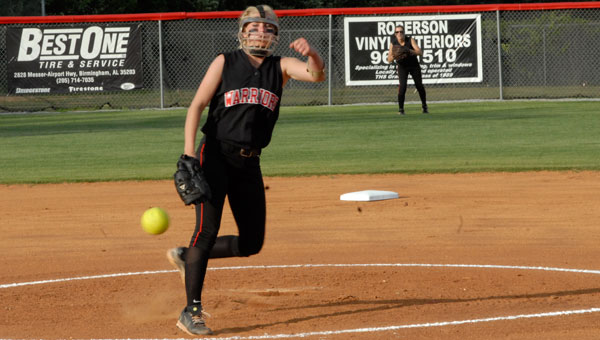 ALABASTER — The Thompson High School softball team recovered from a slow start in Alabama High School Athletic Association Class 6A, Area 10 play to earn a shot at the regular season area championship in its final area game against Hoover.

The Warriors, who started off 0-2 in Class 6A, Area 10, won three straight area contests, including a sweep of rival Pelham, to face a one-game showdown April 26 for the area title with the Buccaneers.

Thompson struggled at the plate and a strong wind blowing out of the park in left field hampered the Warriors’ pitchers in a 8-0 loss to Hoover.

The Warriors managed only three hits at the plate and had only three base runners in the game.

After the first nine batters were retired in order, Sarah Beth Watkins led off the bottom of the fourth inning with an infield single before being stranded at first base following back-to-back strikeouts and a ground out. Watkins finished 1-for-3 at the plate.

Following a fly out in the bottom of the fifth inning, pinch-hitter Amanda Springer reached on an infield single before being left at first base following back-to-back strikeouts. Springer went 1-for-2 in her two plate appearances.

Marly Terrell opened the bottom of the seventh inning with a single to left field, but a fly out and a pair of strikeouts ended the Warriors’ final offensive threat. Terrell finished 1-for-3 at the plate.

Meanwhile, Hoover scored on eight runs on 11 hits. The Bucs, aided by a gusty wind, belted a pair of two-run homers in the victory.

Rachel Rigney started in the circle for the Warriors and took the loss after giving up five earned runs on eight hits with six strikeouts and a walk in four innings.

Taylor Powell pitched three innings in relief and allowed three earned runs on three hits with three strikeouts. Powell, who entered the game facing a 5-0 deficit, retired the first six batters she faced before running into trouble in the top of the seventh inning.