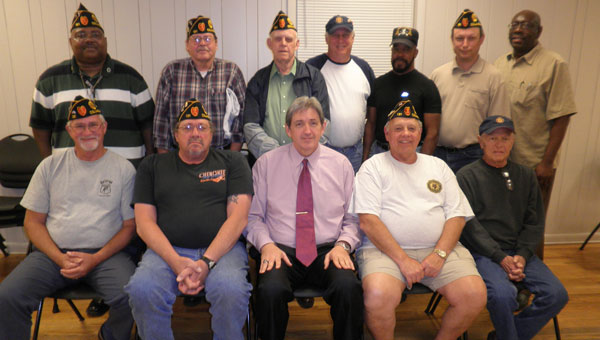 The American Legion is back in Columbiana!

“The Shirley-Holloway Post 131 of the American Legion, a non-profit 501 (c) (19) organization, was first chartered in Columbiana on April 24, 1931, as a patriotic organization devoted to mutual helpfulness,” said Commander Mike Northcutt. “The American Legion is the nation’s largest veteran’s service organization, committed to mentoring and sponsorship of youth programs in our communities, advocating patriotism and honor, promoting a strong national security, and continued devotion to our fellow service members and veterans.

“Membership is open to anyone currently serving on active duty in the US military or honorably discharged veterans who served during any recognized period of war,” Northcutt said. Membership is also open to members of the National Guard and Reserves, and the Post is actively seeking new members.

Post 131 is named for WWI veterans Edward and Winfred Shirley (Chelsea), brothers who were killed in action one day apart, and Willie Holloway (Shelby).

The Legion will be celebrating its 80th anniversary on May 1 at 3 p.m. at the Veteran’s Memorial, donated by the Legion in 1954, and is located next to the Shelby County Courthouse in Columbiana. There will be a formal flag retirement ceremony, open to the public, where the Legion will properly give honor to American flags that have become old and tattered. It is a solemn, patriotic and inspirational ceremony.

Legion member Harry Moon is the Veteran Service Officer (VSO) for Shelby County. The VSO office is in the John Jones Building next to the SC Exhibition Hall. Moon is the go between the veteran or his widow to guide them on receiving their benefits from the Veterans Administration. Moon helps with the proper paper work and this service is free of charge.

The Post meets at 7 p.m. every second Thursday in the Columbiana Recreation Building across from SCHS. For more information visit the Post website at Alpost131.org, call 205-913-0105 or email bamavaman@msn.com.