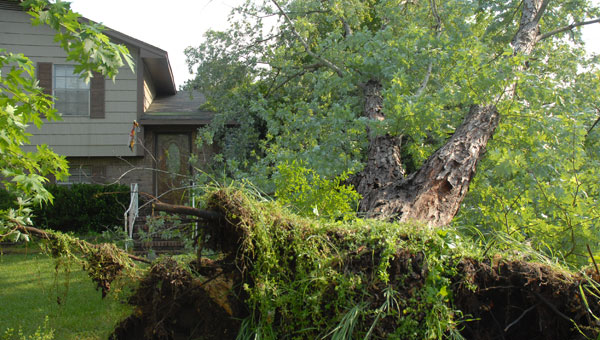 At least two houses were damaged in Pelham after an early morning storm brought high winds and heavy rains to much of Shelby County.

High winds uprooted a large tree and caused it to fall on Del Hiestand’s house on Creekview Drive in Pelham, and Pelham police dispatchers confirmed at least one other house on Wooddale Drive was damaged in the storm.

Hiestand, a Homewood firefighter, said he was not home when the storm blew the tree onto his house. He said he spent most of the night at the Homewood Fire Department preparing to deal with the effects of the storm, and was helping to clear downed trees in Jefferson County when he learned of the damage to his house.

“I was in between calls, and my neighbor called me and told me about it,” Hiestand said as he was waiting in front of his house for an insurance agent to arrive shortly after 9 a.m. “I don’t even know if I can get in right now, because it fell on the main power line going into my house.”

Because the tree was blocking the view of much of the front of the house, Hiestand said he was unsure how extensive the damage was.

“It looks like there may be some roof damage, but we won’t know how bad it is until we get the tree off the house,” Hiestand said. “I never in my mind thought this tree could be pulled up like that.

“The ironic thing is that I was planning to get rid of all of that,” Hiestand said as he pointed to landscaping around the fallen tree. “Guess I’ll have to now.”

According to police dispatchers and scanner traffic, the storm also blew down dozens of trees across much of north and central Shelby County.

Because the storm occurred right before rush-hour traffic, the cities’ first responders rushed to clear numerous downed trees throughout the area, many of which were blocking or partially blocking major roadways.

Other than minor structural damage caused by falling trees, Alabaster and Pelham police dispatchers reported no major damage or injuries after the cities were placed under a tornado warning shortly before 6 a.m. April 27.

“We have not had any reports of actual damage, just a few trees down all across the city,” said an Alabaster police dispatcher.

“We have not heard of any major damage,” said a Pelham police dispatcher. “Just a lot of trees down.”

For Birmingham-area first responders, such as Hiestand, the severe weather spelled a hectic beginning of the day.

“Last night, we (Homewood) gassed up every chainsaw we had, because we knew it was coming,” Hiestand said. “We have been out cutting fallen trees all morning.”

New THS principal preparing for first days on the job

By NEAL WAGNER / City Editor Thompson High School’s incoming principal said he plans to do much listening during his... read more