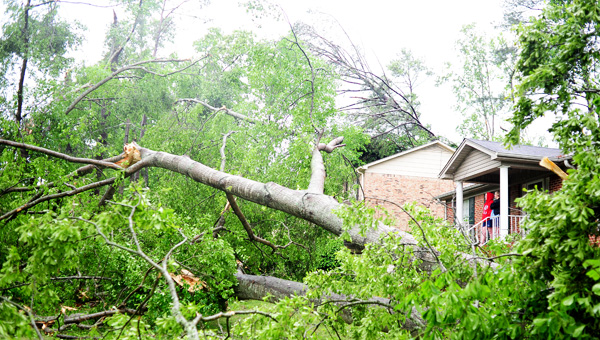 Arielle Peacock received a wake-up call at 6 a.m. when a tree fell onto her roof.

“I ran to the stairs, and all of the trees started falling around my house,” Peacock said, who lives on Lake Park Circle in North Shelby. “By the time I got down to the basement, everything was over.”

Approximately 15 oak and hickory trees of all sizes fell in Peacock’s front yard, totaling her cars. The trees cut the cars in half, she said.

“The big trees are ripped up from the roots; they weren’t cut in half,” she said. “There are big, gaping holes in the ground. 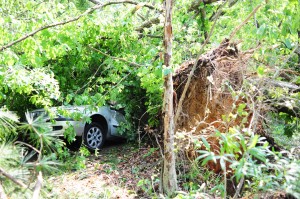 An uprooted tree sits beside the crushed car of the Peacock family on Lane Park Circle following the morning storms on April 27. (Reporter Photo/Jon Goering) 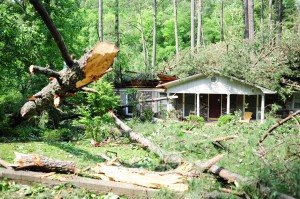 Marriette Horschel also received a wake-up call at 5 a.m. from tornado sirens. She immediately turned on her television for more information.

“I knew it was running fast, so I got my daughter up and got downstairs in our basement,” Horschel said, who lives off Caldwell Mill Road in North Shelby. “We have a basement, praise the Lord.” 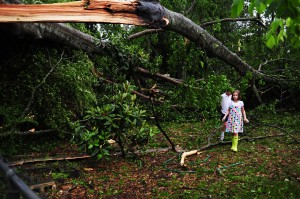 Horschel and her daughter, Maggie, a student at Oak Mountain High School, grabbed the dog and hurried to the basement, taking a flashlight and shoes.

“Going down stairs, I heard glass. It sounded like a freight train was going over the house,” Horschel said. “The last time I heard that sound, I was 10 years old. I’ll be 50 in October, and that sound has not changed a bit.”

Horschel said she didn’t know the damage due to power outage, but made sure she had nothing through her roof.

“It all happened within a matter of three minutes,” she said.

Horschel said she lost 100-year-old trees, and a limb fell into her window.

“All of my neighbors are outside, and no one is hurt. We are blessed, not lucky, blessed,” she said. “There was a guardian angel keeping the trees from falling and crushing us. It was the good Lord.”

U.S. 280 traffic is backed up because of numerous traffic light outages. 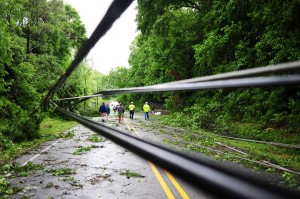 Residents of Caldwell Mill Road walk with Alagasco workers around downed power lines to the site of a possible gas leak following the morning storms on April 27. (Reporter Photo/Jon Goering) 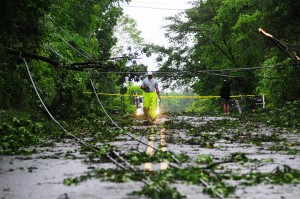 An Alabama Power employee walks past a downed power line on Caldwell Mill Road surveying the damage after the morning storms on April 27. (Reporter Photo/Jon Goering) 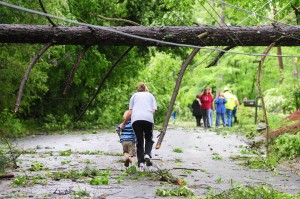 A woman and child run under a fallen tree that was suspended over a road near Caldwell Mill Road in North Shelby County following the morning storms April 27. (Reporter Photo/Jon Goering) 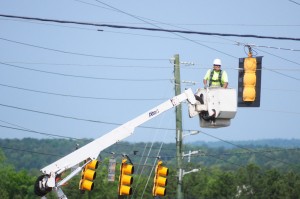 Crews work to get the traffic lights on U.S. 280 back up and running following the storms on April 27. (Reporter Photo/Jon Goering)