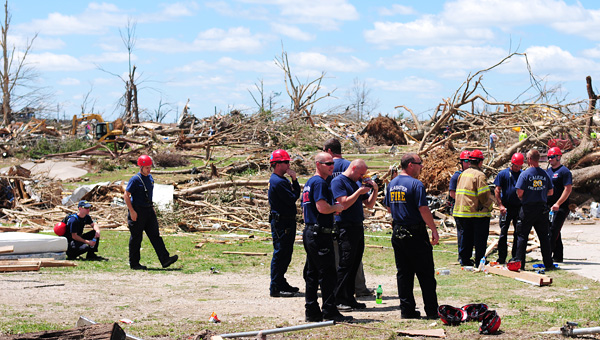 Alabaster and Calera emergency responders wait between operations at the Concord command center on April 28 following the April 27 tornado that destroyed much of the town. (Reporter Photo/Jon Goering)

Alabaster and Pelham officials described scenes of “indescribable devastation” after some of the cities’ first responders traveled to tornado-stricken parts of Jefferson County to help with the rescue efforts.

About 25 police officers and firefighters from the two cities traveled to Concord, a town of about 2,000 which is west of Pleasant Grove and Hueytown in south-central Jefferson County.

Concord suffered heavy damages April 27 when a tornado cut a path through much of central and southern Jefferson County. 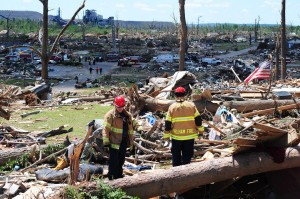 Pelham Firefighters help Concord residents search through their house for family members still missing after the April 27 tornado that destroyed much of the town. (Reporter Photo/Jon Goering)

The same storm also caused widespread destruction and loss of life in Pleasant Grove. Soon after hearing the damage reports from Jefferson County, Alabaster firefighters and police officers traveled to Pleasant Grove to help with search and rescue efforts.

“They were out there most of the night,” said Alabaster Fire Chief Frank Matherson. “When they got back, they said it looked like a bomb had gone off up there. It’s awful.

“There are a lot of areas where you can’t even tell a neighborhood was ever there,” Matherson added. “Our guys are mainly up there for search and rescue or body recovery type operations.”

Alabaster will also provide more help as requested during the next several days, Henry said.

Pelham police officers and firefighters also joined their Alabaster counterparts in Jefferson County April 28, and will remain there as long as they are needed, said Pelham Fire Chief Danny Ray.

“We have committed ourselves up there as long as they need us,” Ray said April 28, noting the city had 19 firefighters and several law enforcement officers in Jefferson County. “Right now, they are still in search and rescue mode.” 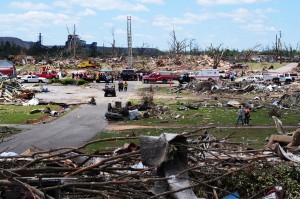 The local first responders traveled to the devastated areas of the state through an agreement with the Alabama Emergency Management Agency, Ray said.

“We offer up our assets to the EMA. With it being declared a disaster area, the EMA requested our help,” Ray said.

“We basically just went up there to the command post and asked ‘What can we do to help?'” Palmer said. “I’ve got a limited amount of resources here, so we are trying to coordinate our efforts to see how we can best serve up there.”

Locally, Alabaster and Pelham were spared much of the damage suffered elsewhere in the state.

“We were very fortunate not to get any of that last night,” Shelby County EMA Director Jeff Edwards said.

“We were so fortunate in Pelham and Shelby County because it went north and south of us,” Palmer said. “My heart and thoughts and prayers go out to a lot of people today.”

By BRAD GASKINS / Staff Writer CALERA – Calera officials Thursday morning praised the city for its response to the... read more