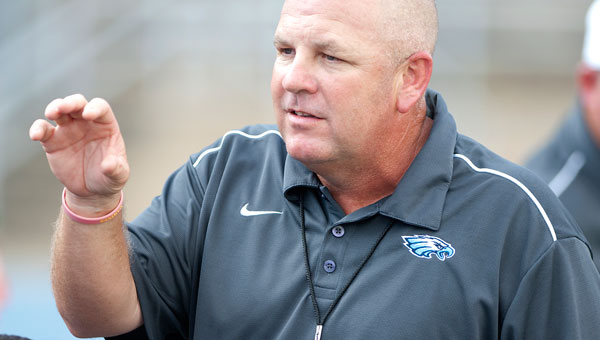 Martin said he is resigning due to irreconcilable differences with the Calera High School administration, specifically Bishop. Martin said he will continue to fulfill his teaching duties until the last day of the school year.

“Over this past year, I have felt intimidated and micro-managed where my football program is concerned,” Martin said.

Bishop said he was surprised when Martin offered his resignation.

“I certainly don’t feel like I micro-managed the program,” Bishop said.

Martin said his relationship with Bishop became strained dating back to an incident during the Eagles’ final game of the 2010 season against Bibb County in the first round of the Alabama High School Athletic Association Class 4A playoffs.

“(Bishop) came to me on the sideline of a playoff game at the end of the first quarter and confronted me for not rotating more players into the game,” Martin said. “This was witnessed by many of my coaches, players and fans in the stands.”

Martin said Bishop outlined goals to improve the program in an April 20 meeting between the two parties. Martin said he felt the goals outlined in the meeting were different from his goals for the program. Martin offered his resignation in the April 27 meeting.

“I’ve been coaching for 25 years, including 19 as a head coach,” Martin said. “I’m confident that I’m very good at what I do. While a few were objective in nature, most of (Bishop’s) goals for the program were subjective. It gave them potential reasons to get rid of me.”

Martin said Bishop told him the “improvements” were needed to “get to the next level.”

“I was appalled,” Martin said. “He continually used the term ‘it is your program,’ but the changes he felt were needed did not reflect it being my program.”

Bishop said he couldn’t discuss the details of the meeting.

“The things for improvement, I’m not going to talk about,” Bishop said. “We don’t discuss that with anybody.”

Martin said Bishop apologized following the incident during the playoff game and the two parties temporarily reconciled their differences, but the recent meeting “opened up old wounds.”

“It was a football coach’s nightmare,” Martin said. “I think our relationship became strained after that. It would be for any coach.”

“I did everything that was asked of me and I went beyond the call of duty,” Martin said.

Martin said he doesn’t have a coaching job lined up for next season and is disappointed with the circumstances surrounding his resignation.

“I love Calera High School,” Martin said. “My intention was to make it my last stop. I had to resign. It was the right thing to do. It’s what is best for me and my family.”

Martin said he told his former players to remain optimistic about the program’s future during his final meeting with the team April 28.

“I told the kids to be positive,” Martin said. “For a program to be successful, the coaches and administration have to be on the same page. I don’t regret my time here. I feel like we’ve made a lot of strides here.”

Martin came to Calera before the start of the 2009 season after serving as an assistant coach at Spain Park. Martin, who led the Eagles to a 14-8 record and back-to-back appearances in the Class 4A playoffs in his two seasons at the helm, also spent time as a head coach at four different high schools in Louisiana from 1990-2006 before taking a position at Spain Park.

“It was important to maintain continuity with the current staff,” Bishop said. “We’ll evaluate after spring practice.”